Man's Best Friend Won't Do It 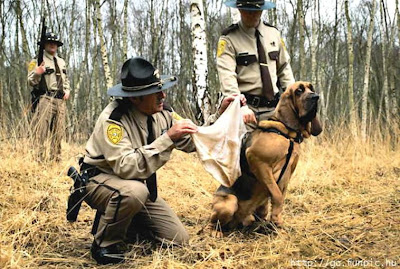 The look on that hounds face is priceless. Evidently there are some things that even man's best friend will not do.

Posted by Coffeypot at 5:28 PM

LOL! Do you blame him?

And you wonder why some dogs turn on their masters. If this isn't reason enough, I don't know what is.

Dogs are way smarter than most of us.

Dogs like sniffing crotches first-hand. Holding a pair of stained gotch in front of that poor dog is the same as offering someone tea and then handing them a used teabag.

Special K, they can smell better, too. I bet taking a whiff of those panties would be like getting hit between the eyes with a baseball bat.

Cooper, yep! One fished out of the trash can.

I have to give the dog credit on that one.

That post below, I seen that video, but when I read your snake shedding skin, I horked my coffee all over. hahahahaha

now, wait... bloodhound or not, how much yew wanna bet he LURVES to nosh on dead, rotting squirrels,roll in poop and all that other stuff. He's just tryin' to impress th' camera.

That is so gross.