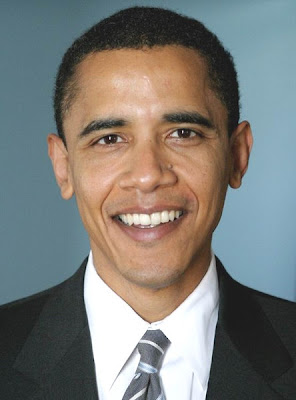 As your future President I want to thank my supporters, for your mindless support of me, despite my complete lack of any legislative achievement, my pastor's relations with Louis Farrakhan and Libyan dictator Moamar Quadafi, or my blatantly leftist voting record while I present myself as some sort of bi-partisan agent of change. Not to mention that if I were not black I wouldn't be here in the first place.

I also like how my supporters claim my youthful drug use and criminal behavior somehow qualifies me for the Presidency after 8 years of claiming Bush's youthful drinking disqualifies him. Your hypocrisy is a beacon of hope shining over a sea of political posing.

I would also like to thank the Kennedy's for coming out in support of me. There's a lot of glamour behind the Kennedy name, even though JFK started the Vietnam War, his brother Robert illegally wiretapped Martin Luther King, Jr. and Teddy killed a female employee with whom he was having an extra marital affair and who was pregnant with his child. And I'm not going anywhere near the cousins, both literally and figuratively.

And I'd like to thank Oprah Winfrey for her support. Her love of meaningless empty platitudes will be the force that propels me to the White House.

Americans should vote for me, not because of my lack of experience or achievement, but because I make people feel good. Voting for me causes some white folk to feel relieved of their imagined, racist guilt.

I say things that sound meaningful, but don't really mean anything because Americans are tired of things having meaning. If things have meaning,then that means you have to think about them.

Americans are tired of thinking. It's time to shut down the brain, and open up the heart. So when you go to vote in the fall election, remember don't think, just do. And do it for me.

I have HOPE. HOPE that Barrack doesn't get elected. And if he does, I certainly HOPE that Hillary isn't the V.P. Because I know she'll pop a cap in his ass so she can take over.

Obama is definitely the RIGHT man. He is far less scary than McCain.

The childish attacks against Obama do nothing to add credibility to your position. Why not spend your time and energy speaking to the positive things about McCain?

Oh wait… in the absence of positive things on McCain, I guess all you are left with is tearing down his opponent.

and unfortunatlly a big majority of people will vote for him for just those reasons.

Well done sir, I applaud you. Brother Dave is obviously a delusional democrat ( or as they cal the m in the strip clubs, and overrated "double D"!)
In all seriousness I keep asking "Obama Oblivions" tell me one single thing he's done. Not ten, not five, but ONE single thing he's done except dress per GQ, not sweat, and put words together that would guarantee a frog a good lay!
Perhaps I'm a cynic, but I calls 'em the way I sees 'em

Your fingers are typing but all I can read is blah blah blah...

Well, guys, I would rather be a delusional democrat than an irrational republican.

I sense sour grapes over Obama's abilities. You are so utterly transparent.

Fortunately, Obama stands a good chance of becoming our next president.

it's alllll about making the the best choice out of two really BAD choices these days...

BD, for eight years I have listen to jokes, snide remarks and vicious attacks to my President all because of jealously of losing power or the fear that religious beliefs will interfere with their lifestyle. But that was okay by the Democrat standards, because all they have to do is say ANYTHING not matter if it was true or not. But they never had any real accusations. He has led the country with a true conviction that he was doing the right thing for the USA regardless of what the poles said. I did not agree with everything he said or did, but I had confidence he was doing the right thing as he saw it. Although I am not a McCain fan, I do believe he is the best of the two choices. He is a patriot and experienced politician. I realy believe he is a Democrat in Republican clothing. But I had rather have a Moderate Democrat than a Far Left Wing Socialist running this country.

The difference between your drivel about President Bush and what I publish about Obama is, ALL that I print is documented and reported on though the media - even CNN (Communist News Network.) He is the most arrogant, self obsessive person on the campaign trail and you people are blinded to his destructive ways because he is young and black and a con-man. He gives elegant speeches someone else writes for him, but if you watch him in interviews and debates, he stutters and sputters and never answers the question. He makes Bush look like an orator.

So not that the tables are turned, you can’t take it. You are talking and acting like you are blind and being led by a nefarious guide - just like the German people did with Hitler. I beg of you to step back and really examine the facts. Forget the war. We are there and should be there till it is done. Forget the lies Bush was fed that got us into the war. Forget all the bullshit about him. He is gone. Look for what is best for this country and what type person should be leading it. Obama is not that person.

Oh boy... you and my husband would get along perfectly!

Thanks for stopping by and commenting on my blog! :)

"{Obama] is the most arrogant, self obsessive person…" Same is true about Bush.

"The difference between your drivel about President Bush and what I publish about Obama is…" Volumes of Bush's crap have been documented by the media.

w0w… coffeypot, do you ever know how to spin the crap out of shit. Not all the political pundits consider Obama to be as far left-wing as some others generally paint him.

I believe it is you who cannot take the fact that Obama will likely be our next president.

ftdBrother Dave,
I apologize, I make it a practice to try not to have discussions with deranged democrats, you go back to your little "Obama Hoe-down" and enjoy. If by some miracle he is elected, I got a real sense that his approval rating will drop to single digits halfway through his first and only term, and America will wake up to the truth, "There ain't NO Free lunch:, no matter what he said. For that I will thank you because it will guarantee at least another eight to twelve years of Republican administrations just to "clean up the mess"!lhwne

w0w… guinness, you have your blinders on.

We have one grand Republican mess to clean up.

But, let's ignore reality by predicting what will happen under Democratic rule.

As with ALL things, time will tell.