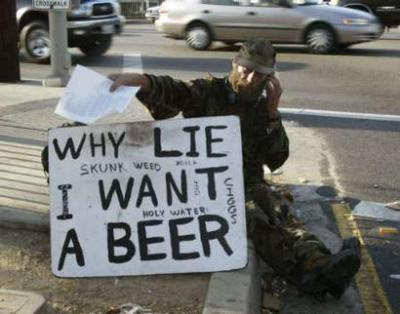 I didn't really do this -- just forwarding. Maybe we should try this though!

Today on my way to lunch I passed a homeless guy with a sign that read "Vote Obama, I need the money." I laughed.

Once in the restaurant my server had on a "Obama 08" tie, again I laughed as he had given away his political preference -- just imagine the coincidence.

When the bill came I decided not to tip the server and explained to him that I was exploring the Obama redistribution of wealth concept. He stood there in disbelief while I told him that I was going to redistribute his tip to someone who I deemed more in need--the homeless guy outside. The server angrily stormed from my sight.

I went outside, gave the homeless guy $10 and told him to thank the server inside as I've decided he could use the money more. The homeless guy was grateful.

At the end of my rather unscientific redistribution experiment I realized the homeless guy was grateful for the money he did not earn, but the waiter was pretty angry that I gave away the money he did earn even though the actual recipient deserved money more.

I guess redistribution of wealth is an easier thing to swallow in concept than in practical application.

Posted by Coffeypot at 7:20 PM

You get this - why can't the rest of America?

If the server took good care of you, it seems to me to be pretty rude and thoughtless not to tip him. I hope it's not a restaurant you frequent--your food might be less well cared for. Or maybe this is just a "parable." I guess you said it was a forward. I think it's a MEAN ONE!

I am really glad it's a forward and you did NOT actually do this to your waiter.

The story brings the concept right down to the grass roots level. Great example.

Mary, I understand your outrage, but that is precisely the problem with Obama's Spread The Wealth plan. This is on a mico-level, but it is still the same principle. The customer is the government taking from someone SHE deems to be wealth because they work successfully for their money, and give it to the low-life professional handouts. He is so wrong for the economy, the safety of our country and how the world will perceive us. That is why we have had so many incidents in the past, before Bush, because we were perceived as talkers, not doers. You will see a great deal of difference in your paycheck if he is elected. TAXES are his major goal to pay for all his bullshit policies.

This is where as an Australian I just don't get it....let me explain.
Down here we aren't "mad tippers" like Americans. Oh, we tip for good service. But it seems you HAVE to do it. Tip calculators, percentages of bill. I mean REALLY!! If its good service then tip the person. If not, don't. For that server to go away all huffy because they expected the tip REGARDLESS of their service is, to me, ridiculous. They get paid a wage. If it is low, sorry not my fault, you took the job. Demand more, go on strike, sleep with the boss, its YOUR responsibility. Not mine to suppliment your work choice! Give me good service and I'll reward you for THE SERVICE.

"I guess redistribution of wealth is an easier thing to swallow in concept than in practical application.
That's because you felt guilty that the server snubbed you. Rightly or not, no one wants a snubbing. Therefore the brain/ego goes for the "easier" option and tips the person that will affect you greater.

Our supermarket chains have member cards that can be swiped for points. "Do you have FlyBuys?" they ask. It amazes me that people say "No, sorry I don't" Why be f*****g sorry?!?! We should NEVER feel emotionally blackmailed by these bastards.

Scarlet goes for a lie down....

Then implicit in your statement is that Obama's plan will redistribute the wealth to those who deserve the help.

As well, we do not know why the recipient of your $10 was homeless. Many might assume it is due to his laziness (unwilling to work; yet, willing to let others support him). The facts could be so different.

In addition, I cannot imagine YOU dropping a ten dollar tip in a restaurant. And, I have heard your "story" in the past when told by others during previous presidential campaigns.

Seems that a lot of the young people are voting for Obama.
Hopefully it won't come back to bite them if he does get elected.
Here in this area we still have the old fashioned voting booths with the curtains.
My husband was talking to his friend from work about the election and voting. Both agreed that they didn't like any of the presidential candidates, so my husband suggested to his friend that he have a few beers before voting.
then when in the voting booth, whip IT out and piss on them all.
Yeah...that would be classy!

Redistribution of wealth. Those were Obama's very words when explaining his plans to Joe The Plumber.

And if he is elected, he won't raise your taxes. He'll just let the Bush tax cuts expire. Your taxes will increase .. but Obama didn't raise 'em. Now THAT'S a prime piece of liberal magic.

I enjoyed the sparring here.