Beauty Is In The Eye Of The Beholder

And I behold a beautiful example of self-mutilation.

I found this on MyFOXla.com. The things people will do just to be different. I do nothing and that’s different enough for me (though I do have pierced ears.) 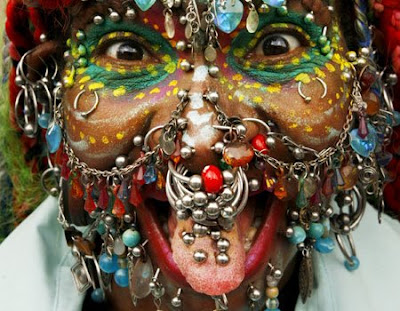 The world's most pierced woman, according to the Guinness Book of World Records, has added to her collection with a 6,005th piercing, the U.K.'s Telegraph reported.
Elaine Davidson, of Edinburgh, Scotland, made the Guinness World Record official in 2000 when she had a mere 462 piercings — 192 of which were in her face.

Nine years later, the Brazilian-born nurse has thousands of piercings including more than 1,500 that she says are "internal."

"To break the record you have to get to a high level," she told the Telegraph. "I wanted to break the record. My family [doesn't] even like tattoos or piercings. But I am happy. I decided to change myself and be me."

Excessive piercing can be dangerous, according to medical experts. In addition to the risk of infection in and around the area of the piercings, people who are well-pierced are considered at high risk for blood-borne diseases such as hepatitis and HIV, which can be spread by reusing needles.

If you would like to see more pictures of this woman go to this site (cut and paste because I still do not know how to make links):

She is a nurse; wouldn't it be a hoot to run her through a MRI machine. She would look different then.

I can't believe she has a job treating people- and I am sorry - I would not allow her near me as a nurse. I don't mind piercings/tatoos on others, but that is excessive and the pic alone makes me ill.

Skippy, you are so right. As a man, can you imagine kissing her? You would draw back with your face and tongue all scratched up (and you can totally forget a blow job.) I bet she is very lonely.

What? "Internal" piercings? What purpose could those possibly serve?!?!?!?!?!?

Oh man makes you wanna go out and buy and industrial strength magnet.

Moooog, she not only is a girl, but a nurse, too. But if you do 'do' her I suggest you use a tin can for a prophylactic.

Burfica, that’s what an MRI is, a huge round magnate. People who have metal in their bodies (a stint in their heart, pins in their bones, any metal at all) cannot have an MRI. The magnetic energy will rip the metal out of the body. That’s why I said it would be a hoot to put her in one.

MRI...LOL...she would pray she never had those internal piercings done!!

Re: "Excessive piercing can be dangerous, according to medical experts."

At least this lady has not gone to excess.

And all that "internal piercing" compliments her internal beauty.

That is absolutely scary.