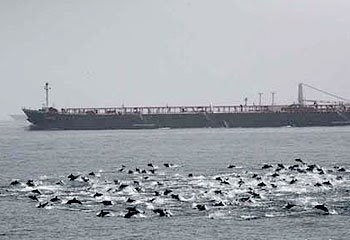 I found this on The Daily Telegraph (link below) and it goes along with the post below this one.

THOUSANDS of dolphins blocked the suspected Somali pirate ships when they were trying to attack Chinese merchant ships passing the Gulf of Aden.

China Radio International reported the Chinese merchant ships escorted by a China's fleet sailed on the Gulf of Aden when they met some suspected pirate ships. Thousands of dolphins suddenly leaped out of water between pirates and merchants when the pirate ships headed for the China's.

The suspected pirates ships stopped and then turned away. The pirates could only lament their littleness befor the vast number of dolphins. The spectacular scene continued for a while.

China initiated its three-ship escort task force on Dec. 26 last year after the United Nations Security Council called on countries to patrol gulf and waters off Somalia, one of the world's busiest marine routes, where surging piracy endangered intercontinental shipping.

About 20 percent of Chinese merchant ships passing through the waters off Somalia were attacked by pirates from January to November in 2008, before the task force was deployed.

A total of seven ships, either owned by China or carrying Chinese cargo and crew, were hijacked.

Tianyu No. 8, a Chinese fishing vessel with 16 Chinese and eight foreign sailors aboard, was captured by Somali pirates on Nov. 14 and released in early February.

The second fleet of Chinese escort ships arrived at the Gulf of Aden on Monday to replace the first fleet.

Posted by Coffeypot at 1:23 PM

The entire piracy operation needs to be eliminated. The monies these guys collect must be going somewhere. Certainly there must be a way to block their access to it.

I saw that article -- found it surprising

That is an amazing story. Good for the dolphins.

I love it ! Very creative ! That's actually really cool Thanks.