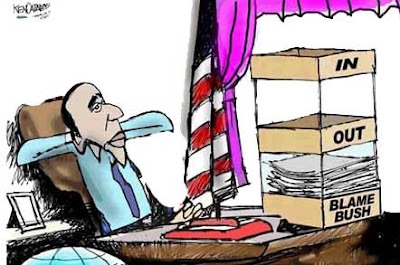 1. When his classless supporters booed President Bush on Inauguration day.

2. When he was a NO SHOW at the Medal of Honor Ball.

3. Order to close GITMO with no plan for the Terrorist held there.

5. Money for ACORN in the stimulis bill.

6. His arrogance when republicans attempted to modify spending bill (I WON).

7. Insisting on the appointment of a “TAX CHEAT” to head up IRS.

8. It seems that all of his appointees cheat on their taxes, how can this be?

9. Taking the control of the census to the Whitehouse so he can control the numbers.

10. What the hell is an “Overseas contingency operation”?

12. Refuses to use the term Terrorist for people who want to kill Americans.

14. About to Nationalize Health Care with no debate. (gutless wonder)

15. Give the Prime Minister of England gift of DVD’s.

16. Give the Queen an IPod with his speeches loaded on it.

17. His push of Cap and Trade, it will amount the the destruction of American business.

19. His demonstrated lack of ability to give a speech without teleprompter.

20. International Apology tour, he has his wife’s lack of pride in America.

21. Snuggling up with South American Dictators and bowing down to a Muslim King.

22. His threat to prosecute Bush advisors for doing their job. This is what his friends in South America do with their opposition.

23. Release of TOP SECRET memos for our enemies to read.

24. Release of photos that will cost the lives of our military personnel.

25. His use of the term “I Inherited”, can he not just be a leader, remember Harry Truman, “the buck stops here” with this guy the buck stops on George Bush.

And The "Photo Op" with Obabma's plane in NYC!!

It was once said that a black man would be president when pigs flew. Well, behold 100 days into his presidency .... Swine Flu...

Rush Limbaugh is NOT a private citizen. One could be no more public than Limbaugh. Limbaugh can criticize whomever he will, but how dare anyone criticize him.

Nationalization of big industry is the best solution under present circumstances. This does not mean there will never be a de-nationalization. We should not fail to realize this.

About 30% of our population is racist. And some people who post are very transparent on that issue.

Anonymous, yet, I missed that one.

Sarge, I pass this one along, too. Thanks!

BD, Rush is a private citizen as apposed to an elected one. He does criticize and he does react to criticism just as you or anyone else would. He is the target of hate from the left and the president because he has the largest audience outside television in the world. And he even makes me want to slap the shit out of him with his ego and some of his statements, but he also tells the truth that you will not hear from the LIBERAL media.

Nationalization of anything is wrong and goes against everything that is American. The auto industry should be left to its own making and they should make the adjustments needed to survive or close down. The banks are a joke. The money they received from the bail-out is in their reserves, not passed on to the consumers as intended. They are hording it for their own gain and protection. Once the government gets hold of anything they fuck it up with bureaucratic rules and regulations and NEVER return it back to privatization. That’s what SOCALISIM is. Government control!

Maybe 30% of the population is racist – on both sides. I am not against Obama because he is black. I am against him because he is a danger to the welfare of this country. I am against Pelosi and Reed and people like ‘Turban’ Durbin who wants the government to take over the country. Don’t you see that only the RICH and POWERFUL are the ONLY ones who make out in a Socialist society? It has nothing to do with color for me. But since you have made several comments about racism, I’m beginning to think you are the racist. And it is only the Democrats who cry racism when Obama is questioned. I have not heard any Republican claim that stance. So clean out your own ignorant cage before you accuse others.

"Once the government gets hold of anything they fuck it up with bureaucratic rules and regulations and NEVER return it back to privatization. That’s what SOCALISIM is. Government control!"

"Don’t you see that only the RICH and POWERFUL are the ONLY ones who make out in a Socialist society?"

This really confused me because as far as I an tell there a heck of a lot of RICH Republicans out there as opposed to the white/blue collar middle class I hang out & vote with in Democratland.

I was going to say I am surprised you all didn't blame swine flu on the man too, but I see Charlie beat me too it...in a less then nice way.

It isn't that you aren't entitled to your opinion Coffey - everyone is, but the way you come across on President Obama is extremely harsh and it makes some readers, I guess, wonder about the real motivation is here. Just my opinion too.

And I don't consider Rush a private citizen either. He is considered a public figure. He has put himself out there. . .and doesn't need to be elected to considered so. Again, just my opinion.

I, for one, would include the fact that he said all bills would be "public" (on the White House website) for at least 48 hours for the American people to review prior to being signed/approved.

SM, the Republicans had seven and a half years of prosperity, low unemployment and economic growth – even with the war going on. It wasn’t until the Democrats took over the house that the economy went into the bucket. Now, thanks to Obama, we owe the Communist Chinese over a TRILLION dollars and he is about to open the boarders to the Mexicans.

I will agree, after thinking about it, that Rush is a public figure instead of the private citizen I claimed him to be. But that does not change the fact that he professes his beliefs, much the same way as Jeneane Garofalo, Alec Baldwin, Oprah Winfrey, and many of the other entertainers profess theirs.

And there are many rich Republicans, some who are of the ‘golden spoon’ league like the Kennedys, who have NEVER worked a day in their life. But most are newer to the ‘rich’ category because the WORKED for it. There is nothing wrong with being wealthy, but look over the world and see who is in charge of the Socialist countries. The live in mansions, drive big cars, have servants and all the trimmings while their countrymen are poor. Socialism is for the very few at the expense of the masses.

And as far as Charlie’s humor, and the one I sent out in my email today, it is just that. Humor! I did the same thing with Bush cartoons and sayings. That does not make me a racist. Just a humorist and my humor isn’t for everyone. Those I feel sorry for, because other than living in a free country, laughter is one of the most important desires I have. I didn’t blame the Swine Flu on Obama. That is stupid for anyone to equate the two. But it was a funny pun.

I respect and encourage your opinion. You make valid statements, much unlike Brother Dave, who comes out of nowhere with his comments. But even he is welcome here because occasionally he makes a good point, too. Worthless but good! He’s a California Liberal, ya know.

I have a policy not to get involved with politics on blogger but I am very curious about the economic success you listed before the dems took over.

Thank you, Christine. I did go and look at the chart. Graphs can show what the intent of the designer wants to show. There are many things that contribute to this chart. The downsizing of the dot com industry for one. Inability of the government to stop the plight of overseas competition and the movement of our businesses to other countries for another. But the Liberal biased media never takes into account that some people are leaving the corporate world to work from home. The entrepreneurs who are starting their own businesses on-line. There are businesses going overseas, but I believe that if the government lowered the corporate tax rate (one of the major reasons along with higher wages), many of them would relocate back to the USA. The defection of the Republican party away from their conservative values is another reason. It was that defection that cost them their jobs in Congress. But we will rebound.

Not sure where brother dave is coming from but I see no advantage in nationalizing industry. Chavez did that with his oil fields and assorted other industries. I do not think we want to go there

Rush is a privite citizen but I am willing to allow that he is a public person, can you show me one example of the president of the US taking verbal shots at any citizan. Our dear leader has deminished the office of the President.

coffeypot...your list is a good read. The comments you have received are also a good read.
Thanks for providing us with a very good post!
~AM

Keep up the good work, Coffey. Humor is the best medicine.... (and, Lord, we'll need it if the gov't takes over healthcare!)

I love it ! Very creative ! That's actually really cool Thanks.