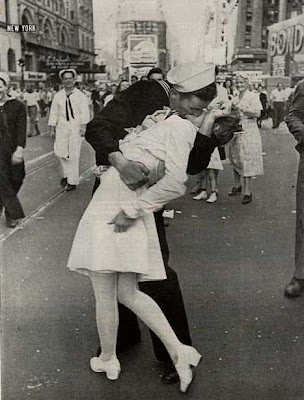 A Marine and a sailor were sitting in a bar one day arguing over which was the superior service.

After a swig of beer the Marine says, 'Well, we had Iwo Jima.'

Arching his eyebrows, the sailor replies, 'We had the Battle of Midway.

'Not entirely true', responded the Marine. 'Some of those pilots were Marines, in fact, Henderson Field on Guadalcanal was named after a Marine pilot killed at the Battle of Midway.'

The Marine then says, 'We Marines were born at Tunn Tavern!'

The sailor, nodding agreement, says, 'But we had John Paul Jones.'

The argument continued until the sailor comes up with what he thinks will end the discussion. With a flourish of finality he says...... 'The Navy invented sex!'

The Marine replies, 'That is true, but it was the Marines who introduced it to women.'

Okay! Stop laughing! That cannot be true because when it came to sex the Marines never advnaced past their right hand.

Posted by Coffeypot at 8:10 PM

Ha!!!!!!!!!! Loved it! Those long months and years at sea got lonely eh?
And for the record. I don't know any military man that has a problem getting laid, except maybe the Army! LOL
My son (the Marine of course) pointed it out to me with the uniforms and how they carry themselves in public. The Navy look dapper and spiffy, the Marines perfect everything from the top to the bottom, then here comes an Army man with his pants half stuffed in his boots, wrinkled jacket and crooked cap! Now I always look to see if I can guess when they are in fatigues without looking too closely and his theory is nearly 100% right! lol

My thoughts exactly, Brother Dave. You are such a bad boy, John.

I hope America's 1sgt reads this.

that's horrible! why am I laughing?!

Why can't we all just learn to get along? It's the damn Air Force we need to watch out for. When they build a base in Iraq, first they build the flight line, then the golf course...then they ask congress for more money to build the rest. Then they whine about doing 3 month deployments on the golf course, while we were doing 1 year.

are you saying their model is...
semper infidelis ??

why do my fingers do that

I am so passing this one along.