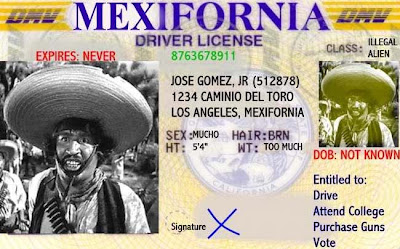 Have you ever noticed…

...that if you rearrange the letters in the words “illegal immigrants” and add a few more letters, it spells out:

“What the hell are you doing here? Go back to wherever you came from and don’t come back until you’re legal.”

How weird is that?

No, actually I have never noticed that.

Funny how each mind works, isn't it? :D

Is it really wrong how hard I laughed at that? Yes? I don't care, it's damn funny!

I stole it from Nobody's Corner and I was laughing the whole time.

If you take some letters away it also spells "cheap landscaping."

and if they are in Georgia, they can vote.......a gift from the Obama Justice (?) Department.

Hey, I cited that dude a few times.
Actually I hope the good honest hard working citizens from any country can come here and become citizens. But I spent some time on the Mexican/ Calif border doing a little "drug interdiction" mission and saw a lot of folks just coming over to commit crimes.
In Bosnia I saw a lot of good, smart hard working folks who wanted to come here so bad--but they were from a country on the shit list, so it they had to go on a lottery system.
While we're at it, can we deport a few U.S. "Citizens" out of the country by mistake?

Now that was funny. Thanks for the laugh.

Yes, I did notice that before! Great minds think alike!