This was sent to me by my blogging friend, Mary, over at No Polar Coordinates.

This INCREDIBLE picture was taken in 1918. It’s amazing that this photo, taken so many years ago, still exists! And now someone has put it online for all of us to see.

What a priceless gift from our grandfathers... 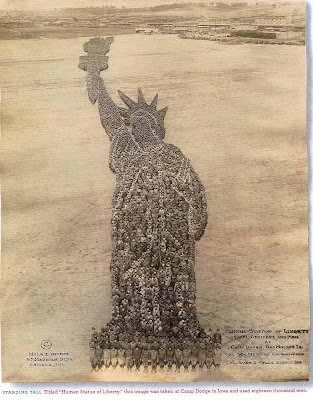 The design for the living picture was laid out at the drill ground at Camp Dodge, situated in the beautiful valley of the Des Moines River. Thousands of yards of white tape were fastened to the ground and formed the outlines on which 18,000 officers and men marched to their respective positions.

In this body of soldiers are many hundreds of men of foreign birth – born of parents, whose first impression of the Land of Freedom and Promise was of the world’s greatest colossus standing with beacon light at the portal of a nation of free people, holding aloft a torch symbolic of the light of liberty which the statue represents. Side by side with native sons these men, with unstinted patriotism, now offer to sacrifice not only their liberty but life itself for our beloved country.

The day on which the photograph was taken was extremely hot and the heat was intensified by the mass formation of men. The dimensions of the platting for the picture seem astonishing. The camera was placed on a high tower. From the position nearest the camera occupied by Colonel Newman and his staff, to the last man at the top of the torch as platted on the ground was 1,235 feet, or approximately a quarter of a mile. The appended figures will give an adequate idea of the distorted proportions of the actual ground measurements for this photograph:

This is amazing. I'd never even heard of it.

This is by far the coolest thing I have seen in a long time!

On a smaller scale, that would look good on the flightdeck of a carrier.

Our historical society has a copy of this print - it's amazing to look at in person.

I FOUND THE The GALLERY!!