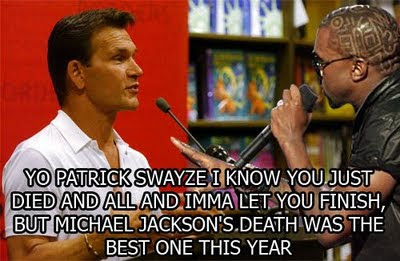 I stole this from Sarah!

Hope, if this bothered you, what will my WalMart photo do for ya?

Kenya made a complete and total fool of himself on television and ruined the acceptance speech of a very talented and gracious young lady. Talk about a racist!!!

Yep-- total racist!!---
But-- did you see what Beyonce' did?? She was VERY gracious-- and even though Beyonce won the video of the YEAR, she said "I'm going to let Taylor Swift finish what she didn't get to say!!" --

Hey-- "I" think "THAT" is what NEEDS to be on the news, NOT, what that stupid mf Kayne did!! Tina

Coffey, you do know that Kenya is in Africa and Kanye was the African in America, right?

Someone totally needs to call that dbag out on his racism but no one will do it! His excuses for his behavior are atrocious but totally indicative of society today. No personal responsibility!

Too bad we can't collectively vote to have his voicebox removed. Hey -if we go to government run health care maybe NObama will make that happen. He seems to think Kanye is a jackass!

Oooo! Guess who had a cup full of Opinion for breakfast...

I felt so sorry for Taylor when that happened, but you know she took it in stride. Kenye apologized and she accepted it. Still does not make it right though, and in the future people can consider the source and act accordingly.

When I saw the news clip, I really wasn't sure WTF...because I had no idea who any of those people getting awards were....and I don't care...but the dude was pretty rude and retarded.

I don't follow it but of course I saw the you tube like the rest of the world. What. A. Dick.

Beyonce is a professional, and she has morals too.

Funny!
I heard something similar yesterday...
Kanye interrupts Patrick Swayze's funeral and says Michael Jackson's funeral was the best funeral of all time!

Yep, folks! He is a racist douche bag and all the apologies in the world won't add any class to him. He acted in ignorance and blatant rudeness that he wasn’t taught at his precious dead mother’s, who is suppose to have been his rock and guiding light, knee.

He can cry and apologize all he wants, but that doesn’t change who he really is. But the media will give him a pass because he is a supporter and a backer of the Democratic Party who can do shit like this with impunity.

OMG, that is frickin hilarious! LOL, :)