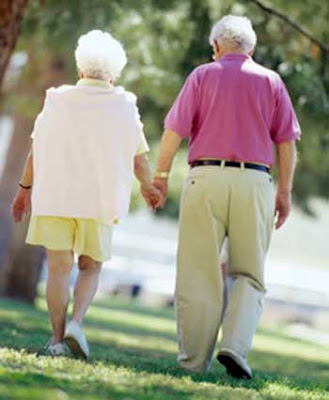 I was talking to a friend today and it was suggested I tell you about the time I hit my seventh grade teacher. I will in another post, but first I want to tell you about this couple celebrating their 50th wedding anniversary.

An off-duty police officer was having a doughnut and a cup of coffee one night in the old restaurant when this older couple came in and sat in the booth next to his. Though he tried not to listen to their conversation, he couldn’t help it because they had to speak a little loudly due to their age and declining hearing.

When the waitress came to get their order, the old man told her that this was their 50th wedding anniversary and this restaurant was where he took his lovely wife on their first date. After a few brief congratulatory comments, the waitress left to get their order - the same one they had over 50 years before - and the old couple started reminiscing.

The off-duty officer listened as they talked about their first date and all the things they did that day, what was going through their minds as the got ready for their first date; him just getting out of the Army and her starting her first job at Woolworths.

Then they stopped to eat their food and then he said, “Do you remember what we did when we finished eating our first meal?”

She said, “Yes, you took me out behind the restaurant, leaned me up against the chain link fence and made love to me right there.”

“Yep! It was a special time.” he said. Then after a pause he said, “Would you like for me to do it again? Once more for old time sakes, jsut like we did back then.”

She blushed and said quietly, “Yes!”

The officer thought, as he watched them pay the bill and leave holding hands, that he had witnessed something sweet and very special. But he was a little concerned about their plans, due to their age and all. So he decided to follow them to the back of the restaurant, not to watch, but to help protect them from outsiders and be there if they needed help. After all, they were between 75 and 80 years old.

He watched as the man bent over and took the panties off the lady and then drop his own pants. He picker her up and leaned her against the fence and immediately went to town. They were moving like madmen with her legs flinging out and about in both directions, and both were moaning and groaning and yelling during their wild frenzied love making. Finally his legs gave way and the fell into a heap on the ground.

The office was alarmed and ran over to help the old couple and see if there were any damages from the fall and spirited love making.

They assured him they were unhurt and pretty good considering what they had just experienced. The officer told them that he was impressed that after 50 years of being together they could still make mad passionate love like they just did.

I wish I could find an electric fence somewhere…

Wow, an electric fence? Talk about putting a little spark in your love life.

anything that jolts them is good I guess.

Mr. R, That is not bad at all. I think it quiet illuminating.

Christine, but wouldn't it be fun to have a jolt in you love life. I sure could use one.

Dude, makes me wonder, though, did the keep going back for more jolts? Loving like that is truthfully electrifying.

This was a nice chuckle to have with my breakfast!

...musta been the night the lights went out in Georgia.


You hit your 7th grade teacher?