An e-mail I received from a friend: 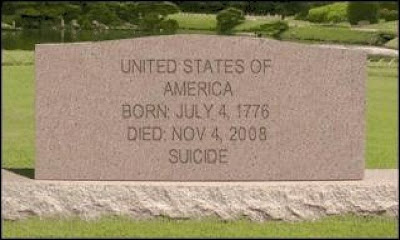 Professor Olson adds: "In aggregate, the map of the territory Republicans won was mostly the land owned by the taxpaying citizens of the country.

Olson believes the United States is now somewhere between the "complacency and apathy" phase of Professor Tyler's definition of democracy, with some forty percent of the nation's population already having reached the "governmental dependency" phase.

If Congress grants amnesty and citizenship to twenty million criminal invaders called illegal’s and they vote, then we can say goodbye to the USA in fewer than five years.

If you are in favor of this, then by all means, delete this message.

If you are not, then pass this along to help everyone realize just how much is at stake, knowing that apathy is the greatest danger to our freedom.
.
.
Posted by Coffeypot at 11:52 AM

You'll love this then...
http://townhall.com/columnists/MichelleMalkin/2009/04/03/obama_census_plan_no_illegal_alien_left_behind

Sorry, I suck at HTML

I dont believe in the h"headstone"sorry.

This is a good reason why the popular vote should replace the electoral college.

Mala, I did got there and I love Michelle Malkin.

Mike, buddy, that is okay with me. No need to apologize. That is what this country is all about. Freedom of speech and the ability to voice your opinion. I just hope we don't loose it all with Obama.

Matty, I have been saying that since I was in high school.