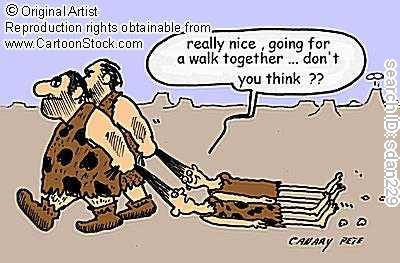 I was at the sports bar yesterday haveing an afternoon beer and talking with a few dudes. As usual it was all testosterone and chest pounding (which makes me cough, by the way) when the subject turned to their wives.

They got to bragging about how they are the king of the castle, how they handled their wives and how dominate they are. I was just listening and chuckling inside. Then one of the dudes looked at me and mentioned that I was being awfully quiet. I told them there was nothing to say, that, like Friday night my wife and I had an argument and I had her crawling to me on her hands and keens.

They were very impressed and ask me what she said. I told them that she reached out and raised the bed sheets and said, “Come out from under there and fight like a man.”
Posted by Coffeypot at 10:12 PM

P.S. I got something for ya on my latest post.

And I thank you, Matty.

Good one. Everyone knows that men can't resist a woman.

At least you were given the option, my wife would have just waited for me to sleep, then smothered me with a pillow.

Bwahaha LMAO! You know what my hubs did to me this weekend, tossed a glass of water at me. So, while we were lovingly doing dishes together, me washing him rinsing - I grabbed the water sprayer and sprayed him with it.

To equal rights baby! I'd be pissed if my hubs thought he dominated me and vise versa. I think men who do think it, act it and go all cave man like, deserve to have their balls yanked on!