Why I Don't Have A Tattoo - Yet

My dad drove a tanker truck for Sinclair Oil for 35 years.

This is the type truck he first drove when he went to work with them in 1940.

This is the type truck he drove when he retired in 1976. 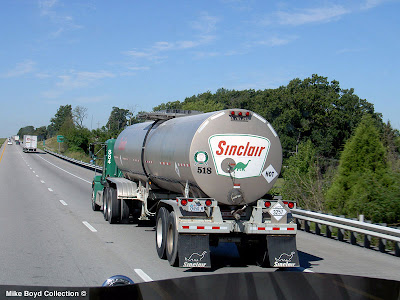 The pictures are a kind of a backdrop to my tale today.

I had commented to Lee over at Hormones, Headaches and Hot Flashes (http://www.headacheshormonesandhotflashes.com/) about piercing and tattoos. I have my ears pierced but no tattoos. Last Christmas I wore dangling Santa Clauses ear rings for our gift opening and diner party with the family. I was hot!!!

But I don’t have a tattoo and I have my dad to thank for that. You see, back in the day (in the ’40’s) one of his delivery locations was the Atlanta Federal Prison.

He would pull up to the gate and wait for the guards to open the huge doors. He would then drive in and get out of the truck while the gate was closed behind him. Then he and the truck were searched. After that he would climb back into the cab and drive through a second set of caged doors that opened for him. When in there the gate would close behind him and he would have to get out and wait in a holding area. When he was securely in the room, honor (trustees) prisoners would come out and drive his truck to the gas terminals and unload the truck.

While my dad was waiting, there was a trustee with him to cater to his needs (coffee, smokes, snacks, etc. Not what you normally hear about needs in prison - perverts.) Mostly they just taled and swapped lies. Till one day my dad ask about his tats. The prisoner (dad never did say what his name was) talked him into getting one on his arm.

So dad started bringing in pencils and a pocket knife and needles (those weren’t considered weapons of mass destruction back then.) And the prisoner started putting an American Flag on dads arm with the pencil lead and needles. He would get a little more done each time he made a delivery, about twice a month.

When the tat was about ¾ of the way through, the prisoner was killed in a fight. The trustee who took his place didn’t know how to do it nor had the artistic ability. So dad carried around the partially finished flag the rest of his life. I ask him why he didn’t have it finished professionally and he said he didn’t have the money (I personally think it was out of respect for the trustee who started it.)

Anyways, he always said that he regretted ever starting it and warned me about getting one. They are forever and what you think is cute now may not be so cute 40 years later. So I didn’t. I was probably the only sailor on my ship that didn’t get one. Guess I never got that drunk, but I didn’t spend many an hour in the tat shops with my mates while they got theirs. The most memorable is one night Donald and I were getting a little red devil on his upper arm. The logo read “Born To Raise Hell.” What made it so memorable is, Donald is now a Pentecostal Minister in NC. He uses the red devil as part of his testimony of how he went from sinner to savior - praise the Lord - or Bull Shit, what ever you believe.

But you know, I have been considering getting one lately. Maybe my family Coat of Arms on my upper arm. 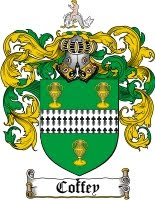 Maybe with a little less flair around the edges, but the crest itself.

Or, as Carol over at 3!A Charm (http://cshulfer.blogspot.com/) reminded me, there is my ship logo,too.

What’da think? Which one do ya like most? Any suggestions of other types an old, wrinkled (thanks Carol) old man should consider?
.
.
.
Posted by Coffeypot at 2:01 PM

My son had his back tattooed with his army units motto. I will have to post that pic sometime. It's huge.
I like the crest, kinda cool.
What the hell, you're an old man now and your skin shouldn't wrinkle too much more! (showing you lots of love here :)

Thanks for the wrinkle comment…bitch. I have a mirror and stuff. It’s hard to shave with your eyes closed, but it’s okay. I have friends reminding me of how hold I am…

One of the survivors of the sinking of my ship's son had the ship logo tattooed on his arm in honor of his dad. I might post that picture one day.

As a matter of fact, I might update this post and show the logo as an option. Think I will. Thanks! I take back the bitch thingy, too.

LOL!!! (Bitch)
I do like the ship logo too.
You better plan to post a picture if you get this tat done - I wanna see it!

?? You were never Blued, Screwed & Tattoed? - Isn't that illegal in the Navy? :D

Carol, if I get one I most definitely will post a picture.

Paxford, The Navy version is Screwed, Blued and Tattooed. Meaning, you get laid, get up and put on your blues and go get a tattoo. Two our of three for me.

The original was in the industrial sector; inspectors would check for tight screws and nuts and, if everything was okay, would put a dab of blue paint to show that this part had been inspected, and when the machine was fully inspected and ready to go, the inspector would put his mark of 'OK' (tattooed) on it.

personally I'd go with the family crest, My oldest son had our last name in old celtic put on his back, & he plans to have our family motto & crest added, I plan to follow plus add the celtic circle of life with my wife & two sons names added.

Bobby, I was the pics on your blog. I like the idea of the celtic circle.

Tawni, sadly I don't think anyone under 60 will ever see my ass cheeks again.:(

Yes to the tattoo! I have a small boring one that I would like to make into something more exciting if it's possible...we'll see.

I was going to get a Tat in the Navy. If I made the SEALS, I was gonna get the SEAL Trident on one ankle with "Born To Kill" under it, and the the Corpsman Caduceus on the other ankle with "Trained To Heal" under it.

Been thinking about getting one lately. Something different though.

I think both of those choices are cool.

I celebrated my 60th birthday last year by getting a red, white, and blue heart tattooed on my arm. I always wanted one, but Tom, (husband) said NO! His exact words, "Over my dead body!" And that's sorta what happened! He died in Feb. and I got tattooed in April. LOL Our kids both had the ship's logo tattooed, son on his arm and daughter on the side of her lower back. I know that Tom is just shaking his head and laughing. I have no regrets, am glad that I did it.

Erin, I have a girlfriend who had one of her doodles tattooed on her leg at her ex-boyfriends instance. She didn’t really like it so she took the doodle and drew her own design incorporating the doodle and came out with a beautiful fish tattoo. Maybe you could cover your’s up with one of your own design.

Ed, those would have been very cool tats. Sorry you weren’t able to get them. Go back to my blog titled FUUUUUCCCCCKKKK and look at that picture. That would be a good tat for today’s world.

Mary, that made me spit out my coffee. Funny comment and good for you. Thank you kids for their service for me, too.