Tiger Woods - You Know It Had To Start 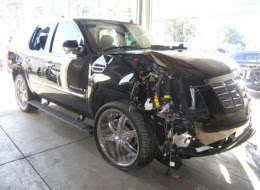 Tiger Woods is so rich that he owns lots of expensive cars. Now he has a hole in one.

What's the difference between a car and a golf ball? Tiger can drive a ball 400 yards.

Tiger Woods wasn't seriously injured in the crash, but he's still below par.

What were Tiger Woods and his wife doing out at 2.30 in the morning? They went clubbing

Tiger Woods crashed into a fire hydrant and a tree. He couldn't decide between a wood and an iron.

Ping just offered Elin Woods an endorsement contract pushing her own set of drivers. They named them Elin Woods..."clubs you can beat Tiger with."

Tiger just changed his nickname but still kept it in the cat family--his new name?: Cheetah

Since Tiger drives an Escalade, can he blame the accident on his caddy?

Chinese are already making a movie about Tiger Woods' crash. They are calling it, " Scratching Swede, Lying Tiger."
Posted by Coffeypot at 10:00 PM

Cheese and rice. These are terrible.