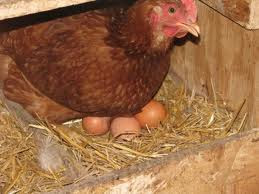 Dave came home drunk one night, slid into bed beside his sleeping wife, and fell into a deep slumber.

He awoke before the Pearly Gates, where St. Peter said 'You died in your sleep, Dave.

St. Peter said, 'I'm sorry, but there's only one way you can go back, and that is as a chicken.'

Dave was devastated, but begged St.. Peter to send him to a farm near his home. The next thing he knew, he was covered with feathers, clucking, and pecking the ground.

A rooster strolled past. 'So, you're the new hen, huh? How's your first day here?'

'Not bad,' replied Dave the hen, 'but I have this strange feeling inside. Like I'm gonna explode!'

'You're ovulating,' explained the rooster. 'Don't tell me you've never laid an egg before?'

'Well, just relax and let it happen,' says the rooster. 'It's no big deal.'

Dave did, and a few uncomfortable seconds later, out popped an egg!

Dave was overcome with emotion as he experienced motherhood. He soon
laid another egg -- his joy was overwhelming.

Way too funny tonite Coffey - u are a mess & a half.

What.can.I.say?
Wonder if this was created from experience......

Where do you get these? Funny as always!

Haaahaaaahhaaa!!!
Passing this one to Ward!

And just this morning there's a news story about a recall of 228 million eggs. Coincidence? I think not!

I really don't know where you get this stuff, but it's hilarious.

Ha! That reminds me of the dreams I have when I have to pee REAL bad.

Damn.
I was just thinking of a fried egg sandwich.
Not any more.

I read this and died laughing and now could hardly read it to my husband because I am laughing so hard!! Thanks for a really good laugh tonight!!