John Deere And The Bedroom 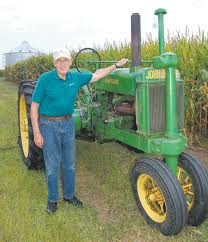 I was passing by Harry's barn one day when through a gap in the door I see him doing a slow and sensual striptease in front of an old green John Deere.


Butt clenched, he performs a slow pirouette and gently slides off first the right boot, followed by the left.

He then hunches his shoulders forward and in a classic striptease move lets his suspenders fall down from his shoulders to dangle by his hips over his jeans.

Grabbing both sides of his plaid shirt he rips it apart to reveal his beer stained t-shirt underneath and with a final flourish he tosses his ball cap on to a haystack.

"What in tarnation are you doin', Harry?" I asked.

"Whoa CP, ya scared the heck outta me" says an obviously embarrassed Harry, "but me and the Missus been having some trouble lately in the bedroom department, and the therapist said I should do somethin' sexy to a tractor."

“Damn, Harry,” I consloe, “I haven’t noticed anything wrong with her in the bedroom.”

I do love my redneck friends and in-laws…
Posted by Coffeypot at 9:07 AM

That's just scary in more ways than one!

I snorted at the 'something sexy to a tractor' and spewed at 'sister'.....only you Dear John....only You

I have never seen a old John Deere like this before. Wow! so wonderful!