Nude Blogging and America Is Rulled By Nero Obama

Hey, peeps! It’s nude blogging time again. I’m here in the Travelodge in Winchester and THE SUN IS SHINING. No so when I was unloading the dogs (not an easy task when it’s raining dogs and cats, I tell ya.) All I had this time were 15 puppies of mixed breed.

But this time was unusual. The first pup I tried to take from the cage was scared to death, or hated the rain, or didn’t like my red shirt (Red Shirt On Fridays To Show Support For The Troops.)or didn't like men. He would snap and yelp like someone was stomping his tail and would not come out. I thought he might not like men, so the lady who runs the shelter tried with the same results. So we took the cage to his new pin and dumped him out. He immediately began running around like nothing was wrong.

But his little show upset the other puppies in the front of the van and they all yelled (not barked, but yelped) loud and strong while squirming and trying to get down. The first 8 pups were difficult to handle, to say the least. And one little Shar Pei mixed bit my thumb. Yep! The same thumb that fucking cat latched on to in LA. I’m getting tired of loosing my precious bodily fluids just to give the animals a better home. (Or the main course in a meal.)

But all of them were happy once they were in their new kennels and had access to each other. Me, I bled.

Also, my friend, Nancy, sent this to me and I had to let you see it. Most of you have probably seen it before, but it is worth seeing again.

WHILE AMERICA WAS BURNING 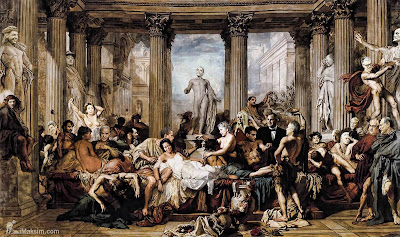 (Click on the picture twice to see it bigger sized)

In November you can change the course of this socialist administration by voting - or you can sit on the couch and complain. Your choice. Remember these words of wisdom, you can't fix stupid, but you can vote it out. Remember to take out the trash on Nov 2nd, 2010.

lol Coffey - keep on and you're gonna lose that "pointing" finger !!

Yes I have seen the BS before. It's not good art and it's stupid. That's my opinion. SMILE

You need to get yourself some thick leather gloves. Farmers never trust an animal with a mouth and after being bitten twice, it might be a good idea to latch on to a good idea to protect yourself. If they were biting your knees, I'd recommend leather chaps like cowboys wear.

Love the picture! And to comment to you on Charlene's comment,.....I personally enjoy the sight of a man wearing chaps. No other attire needed.

RTL, The fingers can still get the job done, it's my thum that is taking the beating.

Charlene, I knew you wouldn't like it since it's making fun of our Socialist president. And I did tell the lady that I need to look into a pair of gloves. But I have been running pets for 3 years and doing Santa Clause at Pet Smart for 4 years and this is the second time I’ve been nipped. I was just slow today.

Middle Child, I’ll wear chaps for ya…but wait till it gets warm again. The chill might not proved the picture you would like to see.

You're swell to take them pups up yonder. I just love that about ya!

Glad you made it okay. Sucks to hear you got bit again.

You must be mighty tasty to the animal kingdom!