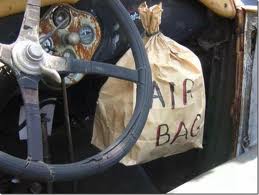 It's that time of the week again, folks.  Time to give you some more sayings from my redneck community.

Most of them are very meaningful, but outsiders will say they are just a bag of hot air.  You be the judge.

Did you hear about the redneck who passed away and left his entire estate in trust for his beloved widow?
She can't touch it till she's fourteen.

What's the most popular pick up line in Arkansas?
Nice tooth!

Did you hear about the new 3 million dollar Arkansas State Lottery?
The winner gets 3 dollars a year for a million years.

What do a divorce in Arkansas, a tornado in Kansas and a hurricane in Florida have in common?
Somebody is fixin' to lose them a house trailer.

Why do folks from Arkansas go to the movie theater in groups of 18 or more?
17 and under are not admitted.

What do you get when you have 32 Arkansasians in the same room?
A full set of teeth.

Did you hear that the Governors mansion in Arkansas burned down?
Almost took out the whole trailer park.

A new law was recently passed in Alabama.
When a couple gets a divorce they're still brother and sister.

How can you tell if a redneck is married?
There is tobacco spit stains on both sides of his pickup truck.

Did you hear that they have raised the minimum drinking age in West Virginia to 32?
It seems they want to keep alcohol out of the high schools!

What do they call "Hee Haw" in Arkansas?
A documentary.

What do they call “Hee Haw” in Kentucky?
"Life Styles of the Rich and Famous."

How many rednecks does it take eat a 'possum?
Two. One to eat, and one to watch for cars.

Why did God invent armadillos?
So that rednecks can have 'possum on the half shell.

What is a Redneck’s defense in court?
“Honest your Honor, I was just helping the sheep over the fence.”
.
.

Aren't we southerners a questionable and disgusting lot ;)

What is a Redneck’s defense in court?

“Honest your Honor, I was just helping the sheep over the fence.”

The tobacco spit stains cracked me up!

LS, we are all that and more, but we can be your best friend or worst enemy.

Pamela, are you hearing that buzzing again?

bludviolet, the one about the Moose Head still makes me laugh.