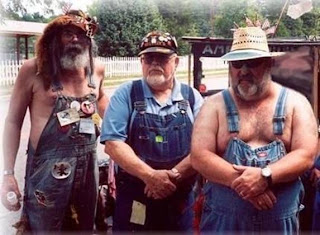 As you have seen over these past few Mondays that rednecks have a great way with words and sayings and stuff, but they also have a big, sensitive heart, too. For example, back home there were these three rednecks, Cooter, Bubba and Junior, who were working up on a cell phone tower.


At the end of the day as they start their descent from the tower, Cooter slips, falls off the tower and is killed instantly. As the ambulance takes the body away, Junior says, ‘Well, shucks, someone should go and tell his wife.

Bubba says, 'OK, I'm pretty good at that sensitive stuff, I'll do it.'

Two hours later, he comes back carrying a case of Budweiser.

Junior says, 'Where did you get that beer, Bubba?'

'Cooter's wife gave it to me,' Bubba replies.

'That's unbelievable, you told the lady her husband was dead and she gave you beer?'

'Well…not exactly', Bubba says. 'When she answered the door, I said to her, "You must be Cooter's widow, and she said, 'You must be mistaken. I'm not a widow.'

‘Then I said, 'I'll bet you a case of Budweiser you are.'

Rednecks are good at that sensitive stuff.
Posted by Coffeypot at 1:09 AM

Lol. Too funny,and maybe too true :)

I respect a woman who honours a bet like that. It takes class.

I'll try that next time I have to give a death notification.

Bubba must be a man of very few needs.