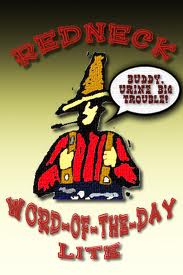 The Atlanta School Board, feeling left out by the fuss over "Ebonics," has decided to designate Southern slang, or "Hickphonics," as a language to be taught in all Southern schools. Here are excerpts from the Hickphonics/English dictionary:

BARD -- verb. Past tense of the infinitive "to borrow."
Usage: "My brother bard my pickup truck."

JAWJUH -- noun. A state just north of Florida. Capital is Hot-lanta.
Usage: "My brother from Jawjuh bard my pickup truck."

MUNTS -- noun. A calendar division.
Usage: "My brother from Jawjuh bard my pickup truck, and I ain't herd from him in munts."

RANCH -- noun. A tool used for tight'nin' bolts.
Usage: "I think I left my ranch in the back of that pickup truck my brother from Jawjuh bard a few munts ago."

ALL -- noun. A petroleum-based lubricant.
Usage: "I sure hope my brother from Jawjuh puts all in my pickup truck."

FAR -- noun. A conflagration.
Usage: "If my brother from Jawjuh don't change the all in my pickup truck, that things gonna catch far."

BAHS -- noun. A supervisor.
Usage: "If you don't stop reading these Southern words and git back to work (or studying), your bahs is gonna far you!"

TAR -- noun. A rubber wheel.
Usage: "Gee, I hope that brother of mine from Jawjuh don't git a flat tar in my pickup truck."

TIRE -- noun. A tall monument.
Usage: "Lord willin' and the creek don't rise, I sure do hope to see that Eiffel Tire in Paris sometime."

TARRED -- adverb. Exhausted.
Usage: "I just flew in from Hot-lanta, and boy my arms are tarred."

ARE -- pronoun. Possessive case of we used as a predicate adjective.

RATS -- noun. Entitled power or privilege.
Usage: "We Southerners are willin' to fat for are rats."

FARN -- adjective. Not local.
Usage: "I cuddint unnerstand a wurd he sed... must be from some farn country."

JEW HERE -- Noun and verb contraction.
Usage: "Jew here that my brother from Jawjuh got a job with that bob war fence cump'ny?"

HEAVY DEW -- phrase. A request for action.
Usage: "Kin I heavy dew me a favor?"

That’s about it for the learnings of proper English.

On another subject, y’all knows how friendly we are here in the South. But that don’t mean we accept just anybody. We can be pretty suspicious of outsiders.

For example, there is this story, reported to be true, out of Alabama about this guy walks into a bar down in Birmingham and orders a Mudslide.

The bartender looks at the man and says "You're not from round here are ya?"

"No" replied the man, "I'm from Pennsylvania."

The bartender looks at him and says "Well what do you do in Pennsylvania?"

"I'm a taxidermist." said the man.

The bartender, looking very bewildered, now asked, "What in the world is a tax-e-derm-ist?"

The man looked at the bar tender and said "Well, I mount dead animals."

The bartender stands back and hollers to the whole bar which is staring at him, "It's okay, boys! He's one of us!"

Ya have to earn yo respect before we feel comfortable about ya.
.
.
Posted by Coffeypot at 12:32 AM

Yeehaw! I love your redneck quips. Makes me laugh.