My faith in internet stories has been restored.
Finally, there’s some honesty in big buck hunting stories... 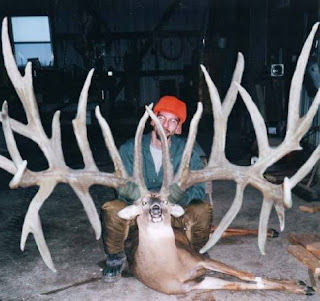 Here's a picture of the new world record whitetail.  It was taken by the cousin of a co-worker's sister's, uncle's, best friend's, son-in-law's, niece's hairdresser's, neighbor's ex-boyfriend's oldest nephew.
Reportedly it will score 2603-1/8 by B&C standard and was shot in West Texas on a really windy day, 85 degrees downhill, around a curve at 900 yards with a 22 mag.
Supposedly, this deer had killed a Brahma bull, two Land Rovers and six Jehovah's Witnesses in the last two weeks alone.

They said it was winning a fight with Bigfoot when it was shot.  It had also been confirmed that the buck had been seen drinking discharge water from a nuclear power plant.

This has been checked on Snopes.  Honest!!! You don’t think I would send this if I didn’t think it was true do you?

LMAO! I wish my dad was still alive. He was an official Boone & Crockett measurer (you would not believe the stuff that got shipped to our house) and he'd have gotten a big kick out of this.