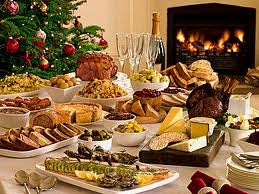 Peeps! You know I am always looking out for ya, don’t’cha? Well with the holidays coming up, along with all the parties and dinners and family gatherings that marks this seasons, you will be eating a bunch of good stuff.  But you have to be careful and selective.  So here are some guidelines to hopefully help you get through the munch and crunch at the table.
1. Avoid carrot sticks.  Anyone who puts carrots on a holiday buffet table knows nothing of the Holiday spirit.  In fact, if you see carrots, leave immediately and go next door where they're serving rum balls.
2. Drink as much eggnog as you can, and quickly - it's rare.  You cannot find it at any other time of year.  So drink up!  Who cares that it has 1000 calories in every sip?  It's not as if you're going to turn into an eggnog-alcoholic or something.  It's a treat - enjoy it.  Have one for me.  Have two.  It's later than you think - it's almost Christmas!

3. If something comes with gravy, use it.  That's the whole point of gravy.  Gravy does not stand alone.  Pour it on.  Make a volcano out of your mashed potatoes.  Fill it with gravy.  Eat the volcano.  Repeat.

4. As for mashed potatoes, always ask if they're made with skim milk or whole milk.  If it's skim, pass.  Why bother?  It's like buying a sports car with an automatic transmission.

5. Do not have a snack before going to a party in an effort to control your eating.  The whole point of going to a Holiday party is to eat other people's food free.  Lots of it.

6. Under no circumstances should you exercise between now and New Year's.  You can do that in January when you have nothing else to do.  This is the time for long naps, which you'll need after circling the buffet table while carrying a 10-pound plate of food and that vat of eggnog.

7. If you come across something really good at a buffet table, like frosted Christmas cookies in the shape and size of Santa, position yourself near them and don't budge.  Have as many as you can before they become the center of attention.  They're like a beautiful pair of shoes, if you leave them behind, you're never going to see them again.

8. Same for pies - apple, pumpkin, mincemeat (well, maybe not mincemeat.)  Have a slice of each.  Or if you don't like mincemeat, have two apples and one pumpkin.  Always have three.  When else do you get to have more than one dessert?  Labor Day?

9. Did someone mention fruitcake?  Granted, it's loaded with the mandatory celebratory calories, but avoid it at all cost.  I mean, have some standards.

10. One final tip: If you don't feel full when you leave the party or get up from the table, you haven't been paying attention.  Re-read tips; start over, but hurry, January is just around the corner.

You're welcome!
Posted by Coffeypot at 10:57 PM

Great! More fruit cake for me!

One of my co-workers camped out by the petite strawberry shortcakes, and told another co-worker they were terrible ... ha ha ...

Pinkus likes to stand next to the buffet table and eat all the cookies...it's almost embarrassing to have to remind him he is not at home!

I never leave the table without feeling over stuffed. Anything less was a waste of time.

Sorry John, I'm a complete waste of time at a buffet table, total opposite of the tips list.
But I drink like a fish, will that do?

Hey, I like fruitcake! Especially the kind that soggy with Rum. This time of year, even magazines piss me off. Half the magazine is full of diets and the rest is full of extra fudge brownie recipes.

OMG I am so glad I read this I was about to have a snack before going to eat the free pies...
you have saved me from the guilt and despair of Christmas eating.. bring it on ...

I think you were negligent in mentioning or singing the praises of stretchy pants, or at a minimum pants with an elastic waistband.

And I find dunking the rum balls or pie into the eggnog helpful. Like those champion eaters who wet the hot dogs before consuming 86 of them.

A little lubrication makes the fifth or sixth piece of pumpkin pie just slide down.

Thank you for the tips...

You will find nothing half as entertaining or informative on my blog http://inspiredbycaffeinenicotine.blogspot.com/

But I'd feel guilty if I didn't shamelessly promote myself

Thank you again for the smile