(After my last post, you might find this a little better on the eyes)
A little bit of this weekend for your viewing pleasure - from the smallest to the largest and one strange one. 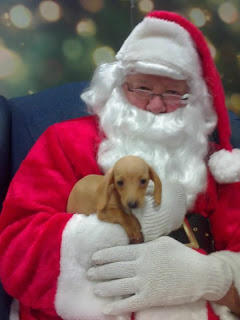 She looks big because of the camera.
You can see by my hand that she is small enough to fit in it.
Peaches was dropped of at the store after finding out how much her shots would cost and because the owner said she could afford her.
It seems her dad had given her two of the miniature Dotson’s for her birthday and she couldn’t afford both of them.
Folks…Peaches weighed 1 pound. She is just a few weeks old.  If you fed her a colonel of corn she would have been bloated.
Notice her coloring is so light for a Dotson, and she loved to cuddle as you can see by my grandson, Mater. 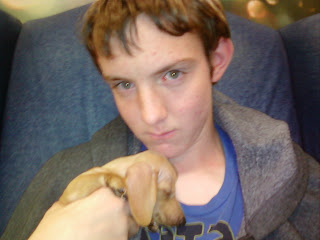 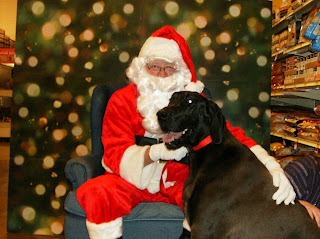 I have had pictures made with him from the time he was adopted as a puppy to last year as a year old, about 140 lbs, and with his front paws on my lap.

Now he is too large to climb up, and this year he was a little shy. But he's still my buddy.

The fish and reptile manager of this Pet Smart came over with this Chinese Water Dragon (no it’s not GEICO Gecko) and wanted a picture of him with Santa. 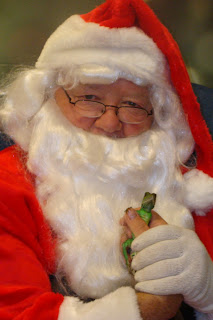 I don’t know why, but then I don’t care as long as he pays like everyone else. (I don’t get paid for doing the Santa thing, FYI. All the proceeds go to Dr. Amber’s animal rescue group.)
I had taken my glove off so I could feel him better and not squeeze him too hard.  So he put it claw, paw, hand..what ever a lizard has, on my thumb for support.  He is a camera whore, too.


This is the best job. There are some amazing animals coming across my lap. I had five dogs, two little ones in my lap and three medium size ones on the floor, dogs with people in the picture, and little kids coming up and hugging me and telling me what they want for Christmas.

I wish I could post pictures of all of them, but that would get boring real fast. Like right about now. So I’ll see ya later.
.
.
Posted by Coffeypot at 3:53 PM

Awwwww :o) Thanks for posting these. It is a lovely break in the afternoon.

And yes, you in a Santa suit is a lot easier on the eyes than your last post. ;o) And your furry (& scaley!) friends are adorable.

The easier on the eyes thing was for the furry and scaley friends. I would only be easy on the eyes to a Great White shark.

I love it coffey. You are so great. But i don't want to make you blush. :)

I could not do that "job". I would want to bring all the puppies home with me.

Jamie, I don't blush, I cause them.

Suz, I'm not Charming...I'm hot. When I take that suit off my tshirt is sticking to my body.

Middle Child, They all belong to others...except on my transports. I always find one or two that I really like. But they are going to a better home.

You have the best job :) What happened to Peaches? She is so gorgeous, so sweet...I hope that she found a good home.

What a great way to spend a day - you make a great Santa!

Has peaches found a home? I'd take her, I'm such a sucker for doxies...and I'm sure she'd get along great with georgie and sammy.