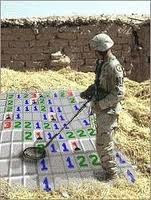 There is no better humor than the thoughts and advice from our military.

'If the enemy is in range, so are you.'
- Infantry Journal -

'It is generally inadvisable to eject directly over the area you just bombed.'
- US Air Force Manual -

'Whoever said the pen is mightier than the sword, obviously never encountered automatic weapons.'
- General MacArthur -

'Any ship can be a minesweeper. Once.'
- Naval Ops Manual -

'Never tell the Platoon Sergeant you have nothing to do.'
- Unknown Infantry Recruit -

'If you see a bomb technician running, try to keep up with him.'
- Infantry Journal -

'You've never been lost until you've been lost at Mach 3.'
- Paul F. Crickmore -

'The only time you have too much fuel is when you're on fire.'
- Unknown Author -

'If the wings are travelling faster than the fuselage it has to be a helicopter -- and therefore, unsafe.'
- Fixed Wing Pilot -

'When one engine fails on a twin-engine airplane, you always have enough power left to get you to the scene of the crash.'
- Multi-Engine Training Manual -

'Without ammunition, the Air Force is just an expensive flying club.'
- Unknown Author -

'If you hear me yell; "Eject, Eject, Eject!" the last two will be echoes.'
If you stop to ask "Why?" you'll be talking to yourself, because by then you'll be the pilot.'
- Pre-flight Briefing from a Canadian F-104 Pilot -

'What is the similarity between air traffic controllers and pilots?
If a pilot screws up, the pilot dies; but if ATC screws up,.... the pilot dies.'
- Sign over Control Tower Door -

The three most common expressions (or famous last words) in military aviation are: 'Did you feel that?' 'What's that noise?' and 'Oh, S...!'
- Authors Unknown -

'Flying the airplane is more important than radioing your plight to a person on the ground incapable of understanding or doing anything about it.'
- Emergency Checklist -

'The Piper Cub is the safest airplane in the world; it can just barely kill you.'
- Attributed to Max Stanley ( Northrop test pilot) -

'There is no reason to fly through a thunderstorm in peacetime.'
- Sign over Squadron Ops Desk at Davis-Montham AFB , AZ -

'You know that your landing gear is up and locked when it takes full power to taxi to the terminal.'
- Lead-in Fighter Training Manual -

As the test pilot climbs out of the experimental aircraft, having torn off the wings and tail in the crash landing, the crash truck arrives. The rescuer sees the bloodied pilot and asks, 'What happened?'
The pilot's reply: 'I don't know, I just got here myself!'
.
Posted by Coffeypot at 2:23 PM

Good ones,thanks for the chuckle.

I loved those but I especially enjoyed the picture

I like the one about ejecting over an area that was just bombed. It seems like common sense but there is probably someone out there who needed it to be said.

Hope you have a great weekend!

"If the enemy is in range, so are you." Damn, its crazy how you can actually forget that, but I actually do every stinking day at work.