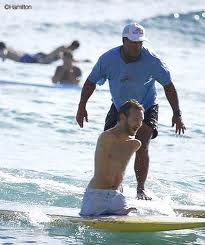 (Actually this is Nick Vujicic, on inspirational and motivational speaker to kids)


A man was sitting on a blanket at the beach. He had no arms and no legs.

Three women, from England, Wales, and Scotland, were walking past and felt sorry for the poor man.

The English woman said "Have you ever had a hug?"
The man said "No," so she gave him a hug and walked on.

The Welsh woman said, "Have you ever had a kiss?"
The man said, "No," so she gave him a kiss and walked on.

The Scottish woman came to him and said, "'ave ya ever been fooked, laddie?"
The man broke into a big smile and said, "No"..

She said, "Aye, ya will be when the tide comes in."
.
.
I will feel 'fooked', too.  All I will be doing between now and Sunday night is reading blogs - maybe commenting some.  I will be leaving in the morning for San Diego and my day cruse on the USS Kidd (DDG 100).

I will take some pictures and try not to bore you with them when I get back.  In the mean time, y'all have a great rest of the week and weekend.  See ya later.
Posted by Coffeypot at 5:45 PM

Have a great trip!!!

So glad you decided to go! Have an awesome trip!! We want to see pictures when you get back.

Have a good trip!

Does that ship have guns and stuff they'll let you shoot?
don't forget your fishin' pole.

Have a lovely cruise, sweetie!

Ah, those Scottish women - clever but sadly unwilling to sleep with random guys on the beach.

hilarious.... lol and he thought he was about to get lucky.

do u make up these jokes?

You need to check out our newspaper.. You were arrested in our sting operation today.. you are charged..and you will be arraigned tomorrow... YOU ROCK DUDE...

Have a great time!

Don't forget the mop and bucket that way you will feel right at home.

Have a great cruise! Please bore us with the pics! I'm all about the pics!...except for the one of armless and legless guy on the surf board. That was disturbing.
Great joke by the way! Still chuckling!

Have a great time and behave yourself!