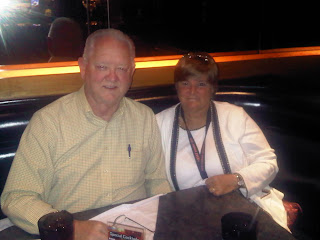 (Me and Judy Before The Beard - Mine, Not Hers)

This is a repost from back in January, 2008. I just wanted to give y’all a better glimpse of my personality and how compassionate I am (was.)

It is important for men to remember that, as women grow older, it becomes harder for them to maintain the same quality of housekeeping as when they were younger. When you notice this, try not to yell at them. Some are oversensitive, and there's nothing worse than an oversensitive woman.

My name is Coffeypot (John to my friends.) Let me relate how I handled the situation with my wife, Judy. When I took 'early retirement' last year, it became necessary for Judy to get a full-time job along with her part-time job, both for extra income and for the health benefits that we needed. Shortly after she started working, I noticed she was beginning to show her age.

I usually get home from the golf course about the same time she gets home from work. Although she knows how hungry I am, she almost always says she has to rest for half an hour or so before she starts dinner. I don't yell at her. Instead, I tell her to take her time and just wake me when she gets dinner on table. I generally have lunch at the Waffle House so eating out is not reasonable. I'm ready for some home cooked grub when I hit that door.

She used to do the dishes as soon as we finished eating. But now it's not unusual for them to sit on the table for several hours after dinner. I do what I can by diplomatically reminding her several times each evening that they won't clean themselves. I know she really appreciates this, as it does seem to motivate her to get them done before she goes to bed.

Another symptom of aging is complaining, I think. For example she will say that it is difficult for her to find time to pay the monthly bills during her lunch hour. But, boys, we take 'em for better or worse, don’t we. So I just smile and offer encouragement. I tell her to stretch it out over two or even three days. That way she won't have to rush so much.

I also remind her that missing lunch completely now and then wouldn't hurt her any (if you know what I mean). I like to think tact is one of my strong points.

When doing simple jobs, she seems to think she needs more rest periods. She had to take a break when she was only half finished mowing the yard.

I try not to make a scene. I'm a fair man. I tell her to fix herself a nice, big, cold glass of freshly squeezed lemonade and just sit for a while. And, as long as she is making one for herself, she may as well make one for me too.

I know that I probably look like a saint in the way I support Judy. I'm not saying that showing this much consideration is easy, though. Many men will find it difficult. Some will find it impossible! Nobody knows better than I do how frustrating women get as they get older. However, guys, even if you just use a little more tact and less criticism of your aging wife because of this article, I will consider that writing it was well worthwhile. After all, we are put on this earth to help each other.

EDITOR'S NOTE: Coffeypot died suddenly on January 21st. The police report says he was found with a Calloway extra long 50-inch Big Bertha Driver II golf club rammed up his behind, with only 2 inches of grip showing. His wife, Judy, was arrested and charged with murder; however, the all-woman jury found her Not Guilty, accepting her defense that he accidentally sat down on it.
.
Posted by Coffeypot at 1:19 PM

That's too funny! I'm glad you reposted it because I missed it the first time around.

I'm glad I read the last paragraph....I was going to see if this would work for me.

As a married man near retirement, I can really appreciate this one. And if I ever "supported" my wife this way, I'd have more than a golf club up my backside. LOL

I retired 3 years ago, and I know what you mean. I'm trying to be a little more patient and understanding with the husband as well. For instance, I let him into the kitchen so he can pack himself a lunch, I understand that when you're working like a dog all day long to keep your wife in spa days, you need sustenance. I don't even mind if he finishes making his lunch before he pours me a glass of wine and runs me a hot bath. I'm nice like that : ) And I'm glad you are too. Judy is a lucky woman.

Good thing she got a Navy guy! Hahahaha!

People change as time flows by, from their looks down to how they communicate with others. Although sometimes, it's unnoticeable. And it is also nature's way of telling you to take it easy, and just relax.