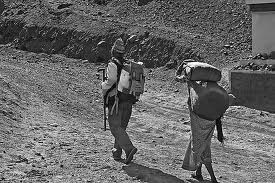 Barbara Walters, of 20/20, did a story on gender roles in Kabul, Afghanistan, several years before the Afghan conflict. She noted that women customarily walked five paces behind their husbands.

She recently returned to Kabul and observed that women still walk behind their husbands.  Despite the overthrow of the oppressive Taliban regime, the women now seem to, and are happy to, maintain the old custom.

Ms. Walters approached one of the Afghan women and asked, 'Why do you now seem so happy with an old custom that you once tried so desperately to change?'

The woman looked Ms. Walters straight in the eyes, and without hesitation said, ‘Land Mines.'

Moral of the story...no matter what language you speak or where you go -

BEHIND EVERY MAN, THERE’S A SMART WOMAN!

And that is true here in the coffeypot, especially.  I think I mentioned that I have taken over the responsibility of my Navy Association’s newsletter.  So at some considerable expense and three days of busting my ass trying to build something in MS Publisher, I was ready to put a hammer through the screen.  Judy called and noticed from my voice I was upset and ask what the problem was.  After unloading three days of frustration, she said she would help me out when she got home from work (never saying that I never ask her for help or rubbing it in that I am hard-headed.)

She came in, we set down and started building the first page.  She showed me stuff and left me to my own project.  Peeps, she has never worked in Publisher before.

I know I’m getting old, and some things are like ‘the blinking clock on the recorder’ to me, but this program was whoopin’ my ass.  It seems that ADHD gets worse with old age.  You have heard the old saying, "You can't see the forest for the trees"?  Well, that's what it was like.  I could see the controls at the top, but not the buttons I needed.  What ever happend to my common sense?  The more I missed them, the more frustated I became.

I’m just one of those lucky guys who has a wife who works wonders.

Should have called me.

Oh well, Judy is a good one. they are hard to find. hang on to her.

I love a man that appreciates his wife! Maybe she's not the only smart one in the household!

I spend a fair bit of time creating publications for education purposes ... I generally like the MicroSoft Office Suite of products ... but I bloody hate MS Publisher! I use it, because I have to for some things, but I have to re-lkearn it every time. Don't beat yourself up.

But continue to appreciate Judy :o)

I am glad that you have a wonderful wife, and I hope that she continues to put up with you! :D

That is priceless! I love it!

Judy rocks! Especially if she has to put up with you...wait...I think she might be Saint Judy.

Land mines! I LOVE IT!

new here
yeah that would never work for me. I respect my husband and all.
But I dont follow. Im a leader.

I would never want my kids to think that is how relationships should go.
mutal respect.
but
very interesting info.
I enjoyed reading it.

KittyCat, welcome. I see that we have some followrs in common. Hope you come back, too.

I think you missed the point of the joke. The women are walking behind the man because they are smarter than him. Go ahead and lead, in this situation, and you might get your ass blow apart...and not in the good way.