TOOLS AND HOW THEY ARE ACTUALLY USED 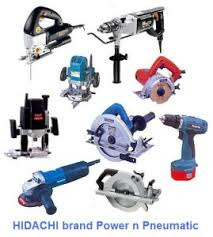 For my Peeps who do your own home repairs or are considering entering into a project that will require power tools, I offer you my assistance.  (Okay, let’s keep the clapping and whistling down to a dull roar, Peeps.)

At any rate you will more than likely need one or more of these tools, yet you have no idea how to use them or what the definitions are for the required tool listed in the enclosed directions.

So, to make your job easier I am giving you the tool, how it’s used and remind you to keep a phone with 911 capability close by.

WIRE WHEEL:
Cleans paint off bolts and then throws them somewhere under the workbench with the speed of light.
Also removes fingerprints and hard-earned calluses from fingers in about the time it takes you to say, 'Oh shit'.

DRILL PRESS:
A tall upright machine useful for suddenly snatching flat metal bar stock out of your hands so that it smacks you in the chest and flings your beer across the room, denting the freshly-painted project which you had carefully set in the corner where nothing could get to it.

Channel Locks:
Used to round off bolt heads. Sometimes used in the creation of blood-blisters.

HACKSAW:
One of a family of cutting tools built on the Ouija board principle... It transforms human energy into a crooked, unpredictable motion, and the more you attempt to influence its course, the more dismal your future becomes.

VISE-GRIPS:
Generally used after pliers to completely round off bolt heads. If nothing else is available, they can also be used to transfer intense welding heat to the palm of your hand.

OXYACETYLENE TORCH:
Used almost entirely for igniting various flammable objects in your shop and creating a fire. Also handy for igniting the grease inside the wheel hub out of which you want to remove a bearing race.

HYDRAULIC FLOOR JACK:
Used for lowering an automobile to the ground after you have installed your new brake shoes, trapping the jack handle firmly under the bumper.

BAND SAW:
A large stationary power saw primarily used by most shops to cut large pieces into smaller pieces that more easily fit into the trash after you cut on the inside of the line instead of the outside edge.

TWO-TON ENGINE HOIST:
A tool for testing the maximum tensile strength of all the crap you forgot to disconnect.

PHILLIPS SCREWDRIVER:
Normally used to stab the vacuum seals under lids or for opening old-style paper-and-tin oil cans and splashing oil on your shirt; but can also be used, as the name implies, to strip out Phillips screw heads.

PRY BAR:
A tool used to crumple the metal surrounding that clip or bracket you needed to remove in order to replace a 50 cent part.

PVC PIPE CUTTER:
A tool used to make plastic pipe too short.
HAMMER:
Originally employed as a weapon of war, the hammer nowadays is used as a kind of divining rod to locate the most expensive parts adjacent the object we are trying to hit.

UTILITY KNIFE:
Used to open and slice through the contents of cardboard cartons delivered to your front door.  Also works particularly well on contents such as seats, vinyl records, liquids in plastic bottles, collector magazines, refund checks, and rubber or plastic parts; especially useful for slicing work clothes, but only while in use.

That’s about it, for now.  Happy project realities.
.
Posted by Coffeypot at 9:06 PM

You left out how the screwdriver is commonly used to place holes in expensive automobile upholstery, when it's forgotten in the back pocket of the user.

I'm a woman and these are FUNNY!

After reading your post, I now know that my husband is an expert at using all those tools, with similar expected results. I'm nervous when he starts a project any more, and I especially expect the air to be peppered with all kinds of outbursts.

I think I'll stay away from all that stuff. I'm not safe with any kind of tool in my hands, and yes, pun intended.

Haha. I resemble some of those!

My husband and I are still laughing! He said he can relate to these.

...just built a storage shed. They are all weapons of war. Even to the veterans. Just ask any hammer.

Jess – Man have I done that before… and pissed off my wife when I did it in her car.

Kristine – They are so true and funny to men, too… because we are the ones who do the dumb stuff.

Jill – My Judy feels the same way. It is a running joke between us that we need to have 911 on speed dial or a ‘Clapper’ around our neck wired directly to EMS.

JJ – I don’t believe entirely that you can’t use tools with your hand.

MF & J&M – We all have the propensity for self-destruction with power tools.

Wrexie - good to see you back again. But, as usual, I’m having trouble getting your blog on my side bar. I have to use the Bookmark thing to find you.