UPDATE: I sent this out to some non-blogging friends and Sweet Tea via email. Sweet Tea sent me back a message saying she felt soooo 'tupid. She couldn't figure how a children’s wading pool had anything to do with the government. Then it hit her. In her defense, folks, it has been a long time...

The federal government today announced that it is changing its emblem from an Eagle to a CONDOM because it more accurately reflects the government's political stance. A condom allows for inflation, halts production, destroys the next generation, protects a bunch of pricks, and gives you a sense of security while you're actually being screwed!

Damn, it just doesn't get more accurate than this. 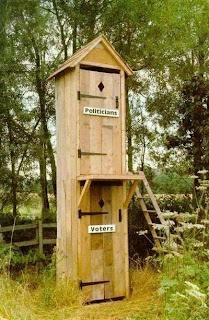 Posted by Coffeypot at 3:53 PM

What a RIOT and how totally ACCURATE!

Good one!! Thanks for the chuckle.

Our elected officials are not always noted for making good decisions based on accurate data, but that new gov. seal nailed it right on the head.

man both of those are so dam true. Sad but true!!!

Trouble is, if you order one of those over the internet, they send you one stapled to a postcard. That's why the Bushes keep having babies.*

This is a political opinion from a non-American who promised himself he would keep his nose out of stuff that's none of his business, but couldn't stop himself. He apologizes.

Excellent example coffeypot, since the majority of our administrations have been lead by Republicans.

Cooper, three nuns were talking. One said that she found a "rubber" in the Father's desk. The second one said she had found it, too, and had punched a hole in it witha pin. The third one fanted.

Brother Dave, I believe it started back with the Wigs.

think we could use the same Government Seal over here too, might write to my MP to suggest it LOL

Sometimes I feel as if I am LIVING all the time in the lower house.

If that is the way you feel, I suggest you go in there with an umbrella. Let it all roll off into the dump it needs to be in. That way, you know its coming, you know you have a plan and you feel secure you will come out smelling like a rose.

Can you get those in seedy restrooms located on the major interstates? And are there ticklers and glow-in-the-dark editions? And finally, how is it that you know about these products first? What telemarketing list are you on?

I liked the second pic as well, I might replicate a birdhouse this spring. I will let you know... NLM

You speak the truth!!!

that's brilliant! I'm so totally pinching this sometime next week.

...wading pool... HEHEHEHE!! My flatmate probably wouldn't get it either: it's been a long, long time for us, too, esp. after I got my wires cut and we dont' NEED red, white & bloo inflatbles anymore.