There is a Difference

We all know that Men are from Mars and Women are from Venus. Below are examples that prove this thrum.

Women As Explained by Engineers 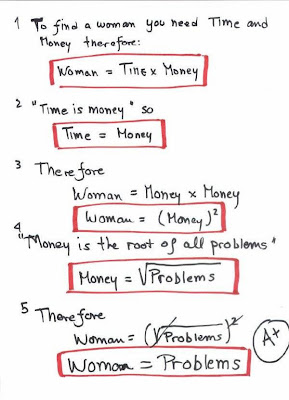 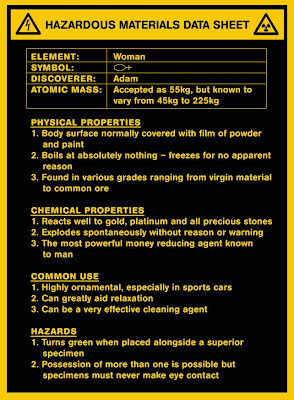 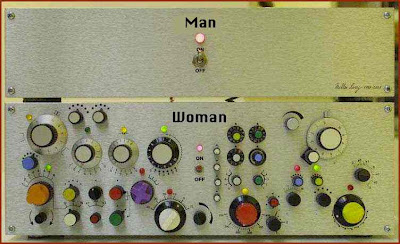 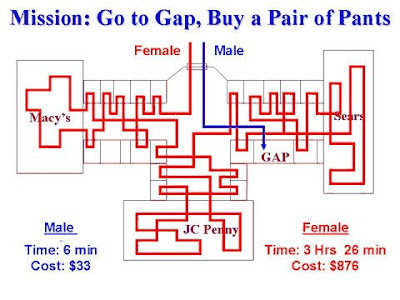 Posted by Coffeypot at 4:57 PM

Hey now, Coffeypot!
Be nice! I haven't made my rounds lately and when I do I see women bashing! How can we fix this? Hmmmm??? :)
~Jan

How can revealing the intricate makeup of a woman be characterized as bashing. ;-)

Well, this is sure to get all of your female readers on your side, huh?

Well e.craig crawford...we are not all the same. This makes us all out to be a frivalous, money hungry, emotional species. Many men share the market in these categories. Maybe more research should be considered before grouping us all the same. :)

I really wish there was just one button that operated a man. Guess what position I would have it in all the time....

tookie tail, women are complicated. Men like action, women like bonding. We want it now, women want it to be slow and romantic, and you know - foreplay. But you don't hear a man go to the ball game and yell, "More National Anthem." We want to play ball. Women want to go to the mall. It's just how it is.

e.craig, we have done it now.

rwa, that’s me! Always opening myself up for…

nll, I would guess the ‘obey me’ button.

Go to the mall? Not me! I hate it! LOL
Action? Love the action! I gave up on the romance a long time ago. Either a man is romantic or he's not. Sure can't make them that way. :) I just have to appreciate the good in him and not worry about the rest. :) See? I'm easy. :hehe:

So true, coffeypot, so true.

ALTHOUGH, I'm the male when it comes to shopping. I would have knocked it out in 6 minutes as well.

I have a theory about all of this, which of course, will require all kinds of space to be occupied. Please forgive me. Ergo Jinglebollocks had a small sentence in this blog the other day pondering the complexity of women as well.

The complexity of women is man made. I proffer this theory based on historical fact.

Man, like most species in nature was tribal and matriarchial(sp). Men rotated in and out of the tribes according to their ability to protect and assist in hunting. Women and children were the nucleus. Everyone had a job to perform. In the beginning no one knew where babies came from, as gestation was so long. Women were held in awe because of their powers to bleed and reproduce. Estrus was seasonal. Like cats, I believe that human women were meant to breed with several males during estrus, in order to ensure impregnation. There are several things a woman's body does after intercourse to ensure retention of sperm, which usually occurs after an orgasm. It would therefore be essential for men to ejaculate quickly in order for the next one to take his place.

Keeping that in mind, tribes happily maintained the status quo of hunter gatherers and women raising "their" children until one fine day some one discovered that the sex act made babies. This changed society completely. Somewhere along the line, men would only protect the women they mated with while controlling these same women by keeping them from mating with other males. As society quickly became patriarchial, men became ruler/conrollers and women became subserviant. This was accomplished by denial of protection and food. Once a male mated with a female, he protected her. Biologically women evolved to be able to offer sexual availability to men more often than the season estrus in order to maintain their protection and remain within the society of the tribe.

This is probably the largest man over nature coup that has ever occurred. Women were meant to have multiple partners, not men, in order to ensure the progression of the species. Since we are not set up for multiple births, imprengnation and survival required multiple partners.

Now, for the whipped cream. Nature prepares a woman's body for optimum sexual response prior and during estrus. Woman's body evolved to respond as in estrus if properly stimulalted physically. How many of you men have had the time of your life with your partner just prior to or during her menses?

Here's the cherry on top. Females in nature are the innovators and inventors. But I leave that for another day.

Thanks Pot! Love ya!

old lady, thanks for the theory; and you don't have to apologies for taking up space as it was well taken up. If I read between the lines, you are frustrated that you can’t legally and morally have multiple sex partners. In you honor, I am posting a chain letter that you can use to help your fantisies come true.

You're so good to me Pot!

Coffey: feel free to bundle ME up and send me to Old Lady with the letter-- I can hand deliver it to her. I love the way that woman thinks!! WHOO-HOO!! Her brain is the biggest erogenous zone, I'll just betcha.

This is going to so totally be blogfodder for me somewhere in the not-to-distant future...

I didn't get the shopping gene.