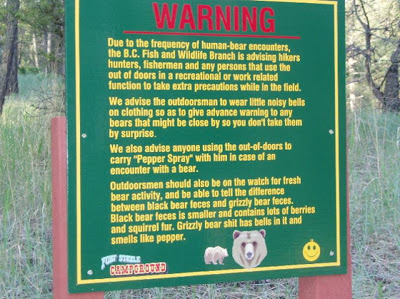 After we camped at the Black Canyon of the Gunnison where there were cougar warnings, and we made PB sleep in his own tent, a kid his age was dragged from his tent, mauled and killed.

Women hiking in Colorado where the Grizzlies are--and I saw some hiking alone there--are warned not to menstruate.

Knowing YOU .. I immediately wondered where this warning was headed. I was not disappointed.

Ya know it's just the law of natural selection and well the poor bears gotta eat too.

If you gonna be dumb enough to go where there are bears, and sound and smell like food.....I'm just saying they ain't doing anything but bear stuff....

same with surfers, boogie borders and skiers in shark water. They look and sound like food therefore they are food.

mary, if I were a woman walking along on a trail in Colorado and I was menstruating and a bear came at me, blood wouldn't be the odor the bear would smell.

e.craig, I never disappoint. I just piss people off.

alekx, bears and sharks can do their bear and shark things all they want too as long as its not me they are doing it to.

I love the outdoors but I tend to stay FAR AWAY from bear country.

I'm sorry, was I supposed to stand there and READ all that shit? Hell no! I've got big, greasy steaks to grill right there next to my tent!!

I rarely go anywhere that I am not at the top of the food chain!

I believe it... grin

I love starting the day with a giggle, cheers coffeypot

I care not to be in the vicinity of Grizzlies....but we've never had a run in with the black bears that roam in the smokies.
They do dig in dumpsters, and if you aren't quick enough unloading your groceries--you might see a bear diggin in your trunk.