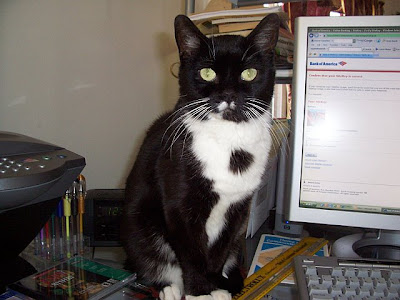 This is my main man, Chaplin (Chappie) who thinks he is a dog. Here he is in his tuxedo with the big button on his shirt. Doesn’t he look dashing with his little mustache? That’s how he got his name; because he looks like Charlie Chaplin. But he is a gentleman, too. Nutless, but gentlemanly just the same.

He greets me when I come in the door and walks with me through the house looking back over his shoulder ‘talking’ the whole time. He will keep on talking as long as you talk back to him. It’s easier if you give him yes and no questions, though.

He lies on my chest when I am reclined in my chair and licks my chin. When he wants to be rubbed between the ears or under the chin, he will bump his head against my chin. He comes into the bathroom when I get out of the shower talking to me as if to say, “It’s about time, dude. You know I am going to lick the water off your feet and ankles, don’t ya?”

He greets everyone who comes in the house and questions everything they do – until they pet him.


This is one of his favorite resting places. 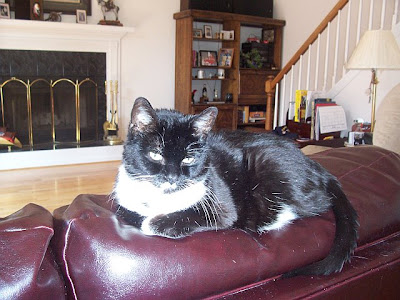 At night, not matter what time I go to bed, he jumps up and goes to my left side, lies down and puts his front paws and head on my left arm. Later, if I stay on my back, he will climb on my chest and lay there looking like the Sphinx and stares at me.

He will also climb on by arm and shoulder when I roll over on my side. As soon as I go to sleep, he will jump down and crawl under the bed for the night.

If I get up during the night, he is right there with me.

We are just two old men hanging together.

Posted by Coffeypot at 2:12 PM

Oh man that's a cute cat! I want him!

He is gorgeous! I love black and white cats...you'd think I'd have one instead of two tigers and one siamese. Sounds like he has an awesome personality to boot. I popped over from Mr. Guinness' blog. I read him on a pretty regular basis and have started checking out his blogroll.

a guy and his cat....awwwwwww

What a sweety boy! And? I just knew you were a cat person!

I loveeeeeee his white whiskers against his black face.

Our cat gets up on the bed but I have to kick him to the foot of the bed when I'm ready to sleep. He is so heavy and I fidget cuz I hurt so much.

He is a nice looking kitty :)
I am more of a dog person, but I do have a gentle old cat that I would not trade for the world.

Love it. I'll try and post a pix of my cat, Mr. Hiss. Problem is he's always been afraid of everything.He was born outside and his mom kept shuttling the kittens around from bush to bush, etc. for almost two weeks while the owner kept chasing them to try and capture them.
Can't say he's over it yet. Teh doorbell sound is not even gone before he is frimly entrenched under the bed.

Cindydianne, can’t do it. He’s my pardner.

Suvvygirl, I’m new to Mr.Gunness, myself. I’ll see you there.

Teri, A man needs to keep his pussy close by.

Olly, I am a sweet boy, thanks. I do love cats, especially barbequed, or fricasseed, or cat-kabobs.

e.craig, he hangs with me, how much cooler can he get?

Burfica, If I try to slap him off I get an arm full of claws. He is a cat, ya know!

Biddie, I’m more of a dog person, too. That is why I get along with Chappie so well. He thinks he is a dog.

Mr. Gunness, Chappie is not afraid of anything. If I try not to swat him, he will look at me an meow like saying, “Go ahead, asshole, and I’ll have a teeth full of ankle as soon as you do.”

What a cute cat! BB and I love cats! Hugs to him.

Chappie is such a great little sidekick for you.

I am allergic to cats. However, if I were not, and got a cat, it would never behave as neat as yours.

he sure is adorable, how old is he?

Mary, I'll be heading to Albany, NY is a couple of weeks.

Kate, Chappie is between 8 & 10 years old. That's why I say it's TWO old dudes hanging together. He is a rescue cat Dr. Amber ask us to foster, but we (me) refused to give him back.

Cute cat. I'm sure you two make quite a pair.

He's awesome :). "Chappie" - I love it! Some cats are assholes, but there are plenty who are great companions and just all-around cool dudes.

My folks had a cat named Darby who looked like a furry orange and white pumpkin. He had 6 toes on each paw and was a dog soul in a cat's body. Chappie sounds a lot like him. :)

you're just an old softie