***Update*** J-Man is home and very sore, but in great spirits - as I knew he would be. He woke up with a joke to the nurse who was checking his bandages. He only slightly grimaces when he has to move his legs, but he sucks it up. He is truly an inspiration to me.

Thank you all for your comments and prayers. He deserves them. 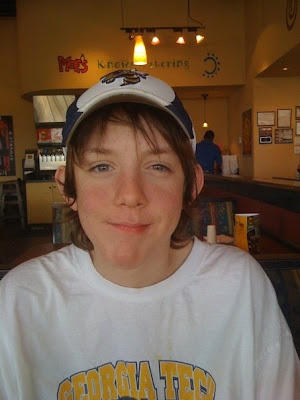 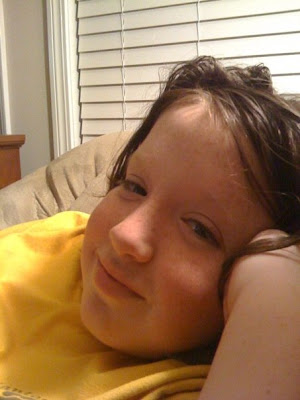 It’s been a year now and my grandson will have his surgery today to remove the screws and plates in his legs. This time it is much simpler than the last time.

J-Man was ‘pidgin-toed’ and it bothered him very much. My ex’s husband is a Shiner and sponsored him as a candidate to the Shiners’ Scottish Rite Hospital for Children in Greenville, NC. He was accepted and had surgery on both legs. They opened his thighs from just below the hip to just above his knees, cut his thigh bones in half, turned his lower legs untill the feet were straight, and then put plates and screws in to hold them in place.

It was very painful for the little dude, but he sucked it up and was a true trooper. As were most of the kids there. If you want true inspiration and witness true courage, go to the Children’s Hospital. But the medical angles there were in love with him. He kept his humor and was an inspiration to me.

He could not put any weight on his legs for six weeks, which means he lived in a wheel chair and have someone pick him up to go to bed or ride in the car the whole time. But now is the time to take the hardware out. However, the biggest news came from his workup. He is now 5’5” tall and, wait for it, he weighs 103lbs. He finally broke the triple digit weight number. He is like his Paw Paw. I looked like I had just come out of Dachau when I was his age.

I think we are going to drive up there (MeMaw, me and Bug) tonight so we can see him before he goes in for the procedure in the morning.

And Bug is another story. My very talented artist and creative writer, Me Maw, gave Bug a book THAT she is putting together. Bug is a horse girl. She loves horses. So Judy is writing a book for her about a little girl (whose name is Bug’s name spelled backward) and a magic horse that lives in a cave. She gave Bug the first chapter, complete with pictures on every page that actually followed the plot, for her eleventh birthday, and will add a chapter on every special occasion.

So Bug got on the computer last night and started her own book. She would find a picture of a horse and write a little history or fact about the horse breed. She is writing it for her MeMaw and titled her book, “Judy’s Horse Information Book”

The first page was a picture of an Appaloosa and she wrote, “The Appaloosa’s history all started with the American Indians. All the appaloosas were used for battle with other tribes. The only horse to race in the breed of appaloosa was a horse named Pamaloosa.” There were pages of entries like the Lipizzaner Stallions, Mustangs, and others. But the one that really got a smile out of me (actually I had to excuse myself to go to the bathroom so I could laugh without her being offended) was her entry about the Clydesdales. “Clydesdales are draft horses. They are very, very strong. If they can carry a wagon they can carry anything. Plus they are very beautiful horses. If they were men all of them would be taken already. This is how beautiful and strong they are.”

God I love those kids.

Glad to hear your grandson had successful surgery .. but what the hell is a "Shiner?" Or is that just one of your dumb-ass typos?

Grandkids make the world go 'round .. don't they.

My plan is when my sons have kids...I'll take them for the day and spoil them rotten. They can eat all the sugar they want....don't have to eat veggies..can have any toy they want as long is it is large and noisey...
then I'll take them home to their parents and ask" let me know how they treat you now."
My revenge.

Oh, what fantastic kidd-os! You must be so proud of both of them

my prayers are lifted for your J-man! Aren't grandkids the best???
You are blessed!
~AM

Well I have a daughter that just loves horses too. She works at the stables she trains at. I think it is great because she works for her lessons. It is a great way to learn responsibility. She has horse pics all over her walls. I am also glad to hear that your grandson is doing good. He sounds like a real trooper. Tell him I said good luck with it all.

e.craig, yep! Shriners should have been the word. Thanks for pointing out my error and making me feek like a college freshman.

CI Dude, I do all those things and still want to keep them. There parents are lucky I allow them visitation rights.

Red, more that you could know.

AM, I know I can count on you for support with my gk's. Thanks!

CS, yep, horse pics, stuffed horses and toy horses. From the age of 2 years, if we went to any toy section she would be looking at all the horse toys and games. She could care less about the girley toys.

Wow. J-Man certainly has been through a lot. Hope everything goes well with the surgery.

Looks like two great grandkids. I know you and Judy are quite proud.

I hope he recuperates well! Yeah...SHRINER, but I knew that!! Anyway, that one made me giggle a bit in a nice way!!

Listen, I had my foot broken and put together again. I know recuperation is slow. So physical therapy will be an absolute must. He really can't miss a single session, no matter how much it hurts.

Also... once he burns out of PT, have his Mom schedule a 1:1 with a yoga instructor. They might even have kids yoga near. Yoga is good because it centers on balance, breathing and concentration. The stretching he'll do will be good for his legs. Stretching exercises are something he'll have to do the rest of his cute little life! Also, he can probably do swimming!! Swim team, water polo!!

And I just love MeMaw!

My Dad was a 32nd Degree Mason and a Shriner.

The Shriners have for the longest time provided hospitalization for children. They have a superb burn treatment center, among other specialties.

Best to your j-Man as he recuperates.

I can see why you are proud of those kids.