From my beautiful friend, Laura, I give you this new flavor of icecream. 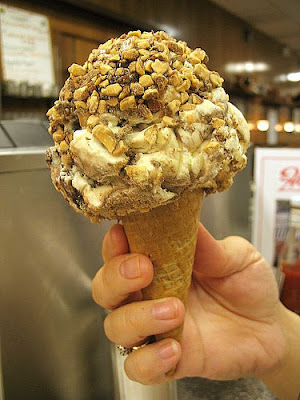 In honor of the 44th President of the United States, Baskin-Robbins Ice Cream has introduced a new flavor: "Barocky Road."

Barocky Road is a blend of half vanilla, half chocolate, and surrounded by nuts and flakes. The vanilla portion of the mix is not openly advertised and usually denied as an ingredient. The nuts and flakes are all very bitter and hard to swallow. The cost is $100.00 per scoop. When purchased it will be presented to you in a large beautiful cone, but then the ice cream is taken away and given to the person in line behind you.

You are left with an empty wallet and no change, holding an empty cone with no hope of getting any ice cream.

Are you stimulated, yet?

When you purchase it I want to be standing behind you.

Just the idea stimulates me.

So, if a real "tax payer" buys one, how much extra are they charging so the "needy" can get two?
He's still not as much fun to pick on as the village idiot who just left office and moved back to his ranch in Texas---now that was a dumbass.

Personally, I would pay to see you buying it with Brother Dave standing behind you in line.

BD, I'm concerned that you standing behind me stimulates you. I never knew.

CI-Dude, I don't agree that Bush is a dumb-ass. It's that he just wasn't as polished in front of a microphone as the conmen, Clinton and Obama.

I'm surprised that he hasn't also had an ice cream named for him that taste like cotton candy... which is essentially nothing more than spun hot air masquerading as sugar. In the end you've spent an arm and a leg for it, have nothing to show for it, and you're left with a sticky mess.