From My Friend Cindy... 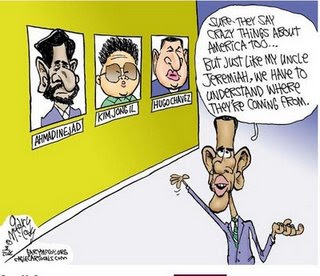 If George W. Bush had given Gordon Brown a set of inexpensive and incorrectly formatted DVDs, when Gordon Brown had given him a thoughtful and historically significant gift, would you have approved?

If George W. Bush had given the Queen of England an iPod containing videos of his speeches, would you have thought this embarrassingly narcissistic and tacky?

If George W. Bush had bowed to the King of Saudi Arabia, would you have approved?

If George W. Bush had visited Austria and made reference to the non-existent "Austrian language," would you have brushed it off as a minor slip?

If George W. Bush had filled his cabinet and circle of advisers with people who cannot seem to keep current on their income taxes, would you have approved?

If George W. Bush had been so Spanish illiterate as to refer to "Cinco de Cuatro" in front of the Mexican ambassador when it was the fourth of May (Cuatro de Mayo), and continued to flub it when he tried again, would you have winced in embarrassment?

If George W. Bush had misspelled the word advice would you have hammered him for it for years like Dan Quayle and potatoe as "proof" of what a dunce he is?

If George W. Bush had burned 9,000 gallons of jet fuel to go plant a single tree on "Earth Day", would you have concluded he's a hypocrite?

If George W. Bush's administration had okayed Air Force One flying low over millions of people followed by a jet fighter in downtown Manhattan causing widespread panic, would you have wondered whether they actually "get" what happened on 9-11?

If George W. Bush had been the first President to need a teleprompter installed to be able to get through a press conference, would you have laughed and said this is more proof of how inept he is on his own and is really controlled by smarter men behind the scenes?

If George W. Bush had failed to send relief aid to flood victims throughout the Midwest with more people killed or made homeless than in New Orleans, would you want it made into a major ongoing political issue with claims of racism and incompetence?

If George W. Bush had ordered the firing of the CEO of a major corporation, even though he had no constitutional authority to do so, would you have approved?

If George W. Bush had proposed to double the national debt, which had taken more than two centuries to accumulate, in one year, would you have approved?

If George W. Bush had then proposed to double the debt again within 10 years, would you have approved?

If George W. Bush had reduced your retirement plan's holdings of GM stock by 90% and given the unions a majority stake in GM, would you have approved?

If George W. Bush had spent thousands of dollars to take Laura Bush to a play in NYC, would you have approved?

So, tell me again, what is it about Obama that makes him so brilliant and impressive? Can't think of anything? Don't worry. He's done all this in 5 months -- so you'll have three years and seven months to come up with an answer.

Naïve, misinformed voters with no common sense did this to themselves and the rest of us. Ignorance is wide spread.

Americans better start waking up and realizing that being cool does not qualify one to be President.

This is so true and if it matters, he did not get my vote.

If George W. Bush had failed to send relief aid to flood victims throughout the Midwest with more people killed or made homeless than in New Orleans, would you want it made into a major ongoing political issue with claims of racism and incompetence?
Yous sighted your own worst explanation, New Orleans.... enuff said

If George W. Bush had proposed to double the national debt, which had taken more than two centuries to accumulate, in one year, would you have approved?
He did approve of it and worse he caused it

If George W. Bush had then proposed to double the debt again within 10 years, would you have approved?
4 More years of Bush and you would have become just another province of the peoples republic of China

If George W. Bush had spent thousands of dollars to take Laura Bush to a play in NYC, would you have approved?
So Crawford Texas was free?


Naïve, misinformed voters with no common sense did this to themselves and the rest of us. Ignorance is wide spread.
You are right electing Bush was the greatest mistake america ever mad its too bad so many others have to clean up and take the blame

Anonymous, whom I believe is either Skippy Mom cowardly lurking again, or some other coward who doesn't have the gonads to place their name, your comments sound like a report from CNN, a notoriously Left Wing Liberal station who attacked Bush at every chance. I stand by my post that Obama-Lama thinks he is different and special when all he is is a con-man.

By the way, ALL Presidents have a free ticked to return to their homes - including Crawford. Clinton didn't return to Arkansas because they didn't want him and because he NEVER owned a house to return too. He has lived off Government housing since he left college. The anointed one's wife went to NY on shopping spree and shows. He wants to bring us all together by shouting out the differences between the whites and the blacks. He is widening the divide.

I am annonymous because I don't want the wingnuts following me home, cowardly? Perhaps? wise? Definately!

Quit amking convenient excuses for Bush he was the worst president you ever had. If only he had the wisdom and gonads his father had. Worst mistake Bush 1 ever made was not making barbara swallow that load

Cowardly, Definitely! So, since you don’t have to courage to face anyone on even ground, then all you say is suspect and useless. You have no character and commitment to even stand up for your principles and ideals. That make you a sad person, but one that will be ignored.

I understand the point of the post is to show how bias the media was against Bush and how they seem to overlook the blunders made by Obama.
The media is afraid to say anything negative about Obama for fear of the race card being thrown out there.
Corporate America and greed are what is bringing down this country.
Politicians rely on the fact that a lot of people have short memories.

well no coffeee I am no coward, I have stared death in his eye and decided to protect others before my self. It worked out in my favour but it was sheer luck

Coffeypot... You're jousting at windmills when you attempt to refute a person who is more intent on ignoring incompetence than facing the reality that our current executive leadership is out of control. Keep exposing the follies of our current President, as will I,and continue to let your voice be heard by those who are slowing but steadily coming to the realization that the "change we can believe in" is the type of change that will enslave us all. America is waking up and we who see our freedoms slipping away must continue to fan the flames until those who think the world owes them a living find that those who actually earn a living throw the demigods out of office for good. We will not be silenced regardless of the threats levied against us by those whose only weapons are shallow egos.

I think your piece on Pershing is just urban legend -- I am a pretty good history buff and I don't think that it was in his nature to be vindictive.

I am truly confused by the things that the media gives the new president a pass on. When he was in my neck of the woods while campaigning he mentioned there were 57 states and he was unaware of H@nf0rd Nuclear Rsv. which played a major role in the development of the nuclear bomb and has been in the news for many years in the controversy over nuclear waste storage and destruction.

The Presidents knowledge of history is poor - and whoever is advising him on it must have failed history as well as his boss.