A Giant Caterpillar was found in a College Dorm Room.... 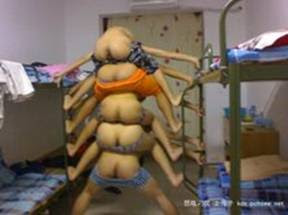 I'll bet their parents are proud!
Posted by Coffeypot at 7:26 PM

That is HILARIOUS! It's been a long time since I've seen such young ass!! Well, unless you want to count my son...but he's just 5!

Love it! Love it!!!!! Tuition well spent. Gotta have some memories!

That is too funny! And a little bit disturbing if you think about it too long....,

Now if they could fart to the tune of jingle bells - THAT would be a real trick!

Now that is awesome and I wonder if the guy in the middle is over 21? hmmmm

Just looks like a bunch of assholes to me.

That's a real old-fashioned college prank at it's best.

That top guys asshole is bugging me. Hmm.

Lee, I don't even want to see any ass off any male.

Olly, I bet you were fun in college.

Daffy, And a hasmat problem, too.

Christine, does it really matter?

Dude, I knew you would tag it as it really is.

What a bunch of assholes.