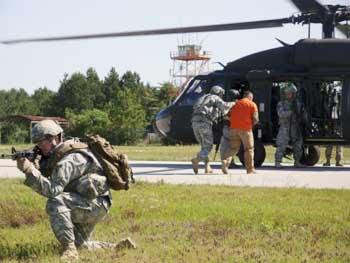 The above photo is of some of the 1140th MP group training in MS.

I am stoked, very happy. But first let me state that I don’t normally do this - talk about things I do outside my blogging sphere. And those I work with on the blogging network I make promise to not mention me when they send out thanks. Reason? Because I don’t do this stuff for recognition, but out of respect and love for those who put themselves in harms way so I can enjoy my blogging life and the freedom of this country.

I have recently become involved in military support (milsupport.) I have four people that I send packages and letters. They are in the Marines, Air Force, Army and National Guard. The Marine, 1st Sgt Michael Burk, will be on his way back to his home base in Hawaii the last of this month. You can read his blog on Castra Prateoria on my blog roll. The others are still imbedded in the shit holes of the earth.

The Air Force guy is a Chief MSgt and has 160 airmen and women imbedded with Army units all over Iraq. His unit is an Intel unit and when I send him stuff, he shares the wealth. He loads it up, climbs on a chopper or a plane and takes it out to his people in the Suck. He is really a class guy, too.

The Army dude is a Lt Col in the medical field. He is a surgeon and is in the middle of some bad shit. He, too, spreads the wealth to his people, who happen to be mostly Navy Corpsmen and the children who come in with injuries received from the Taliban assholes. Y’all read about FOB Keating? The wounded came though his unit. He, too, is a class act and a true hero.

But the reason I am writing about it this time is a couple of weeks ago, Hope, over at Hope Radio, sent out a request for people to adopt a member of a Missouri National Guard Unit (the 1140th MP Co.) The names she had came from the units 1st Sgt, a former contact and supportee of hers, as troops (men and women) who had not received ANY mail in months. She was rewarded with around 15 people wanting to get involved. I got one, packed up a care package and sent an introductory letter to him.

Today I got a thank you email from Spc Robert Grindstaff. He is 22 years old, been in the Army NG for 3 years, working on a degree in Criminal Justice and plans on going to the Police Academy when he returns to MO. He also has a brand new baby girl that he has only spent two weeks with. He does not receive mail from the baby’s mother as he is not married and I don’t know the status of his relationship.

He said, in part, “Thank you so much for the package that you sent, it means a lot to know that there are people back home who still think of us while we are over here at war. Everything has come in handy.”

And “Thank you for the package again, and we are all thinking of all the people back home, its one of the few things that helps us go day to day. Thinking of all of the supporters we have.”

I’ve received many emails from the other guys mentioned, but this one means the most because he has no one writing or supporting him. He seems to have a plan for his life and I will be rooting for him as much as I can.

I can’t explain how proud I am of the men and women who gave up some of their freedoms and a chance to make much more money and date and party and marry and stuff, to serve in a shit hole country and try to make a difference in the world. There are many types of Heroes and these men and women are certainly one type.

There are other types of Heroes on my blog roll, too. LL, CI-Roller Dude, Army of Dude, Citizen Sojak, Citizen Soldier, Kanani Fung - the wife of the Surgeon, Major Perspective, Sgt Charlie, Sgt Grumpy, and my newest blogger, Dacker and, of course, Hope among others. Anytime you want to stop by their place and give them a thank you, will be okay with me.

There are many more like Robert and the other MPs Hope sent out to her contacts. If you want to make a difference in someone’s life, give me or Hope a shout and one of us can tell you how to get started. You won’t regret it.

Hope has men still writing to her that are now discharged and back in the World, and men who are on second and third deployments. Men who send donations to help her in her mailings. Men who she will have as friends for life simply because she took the time to write a letter or send a few things to help them out. They don’t forget.

I know. I would have love to have had a little support from home or from some friends. It is a bummer to see your mates reading and sharing stuff on mail day and you have to rely on a book or a training manual to occupy your mind. I have even volunteered to stand others watches so I wouldn’t have to be part of the stuff in the compartment.

Hope, however, is totally dedicated to this project, much more than I am. Airman Mom, who has two sons in the Air Force (one about to be deployed), also has made lasting friends of people she calls her virtual sons. So if you want to make some lasting friends, and make someone’s life a little better, let one of us know.

And don’t send me any of this ‘Thank You’ shit. Don’t want to hear it. Save it for the troops serving for us and the people on my blog roll. Just so you know…

Now I return your set back over to you and I will restart the debauchery tomorrow.

OH MY!!! That pic-- is it from Camp Shelby in Hattiesburg MS?? I live in H'burg, and we have a really good friend who is an MP that was sent to Kuwait/Iraq just 2 weeks ago.
He asked my hubbby & friend if they could smoke some Boston Butts and serve it to the unit (I bet it's the same unit that's in the pic-- MP's) before they went on lockdown end of July. We were really proud to do that-- and it was really a great feeling to give back to these youngsters who are giving our freedoms to us. When we served them, every one of them said Thank you, and we were saying back to them, "NO, honey, THANK YOU!!!"
Great job, Coffey. I'm sure that means so much to the morale of those kids over there. To know that someone is supporting them. Thumbs UP!! Tina

Tina, I'm gald you did what you did for those guys. Robert is with the 1140th MP Co out of Fulton, MO, and is Afassastan. I Googled 1140th group and found a couple of pics. I also found a picture of a Robert Grindstaff from St. Louis. I don't know if it is the same guy. I'll find out and if so, I'll post his picture. Thanks!

When I saw the Anonymous handle I was about to get mad. I had a run in with a Troll on my FOB Keating post tonight. Fucker!

I'd like to learn more. It seems like such a small gesture on our part to support someone who getting a letter could make such a difference.

Good on you, Coffeypot! Keep up the good work (I didn't actually thank you for your milsupport efforts, did I? heh heh I'm sneaky like that ;p)

The Hubs would probably blush at being described as a hero. He doesn't see himself as that. He just does his job! His hospital staff loves all the goods everyone sends. Most of then are "kids." The eldest is 32.

Yes, last weekend was really bad. It was 24 hours of waiting for news after having received a short word about the T-Ban overrunning an outpost.

Fortunately, he is okay. But it is really bad out there --they got shelled yesterday again. And I think 2 days about another FOB was almost overrun. Needless to say, my prayers are with everyone over there.

I really appreciate all this work that everyone does. I know it's not easy fitting this into a budget, and in this economy every dime is stretched.

So believe me, I think there's a very kind and generous spirit watching over all of you. Good things come from you, and good spirits are returned.

As for "that LtCol," you can follow us over on The Kitchen Dispatch. I can't share a lot, but I do post what I think will be of interest.

Well done. I have sent my first letter and a small package off to the person that Hope assigned me too.

Peach Tart, email me if you really want to get a contact, besides, I owe you a beer an wings or a cup of WH coffee.

Red, you do your part too.

Secretia, yes, there are some true patriots on my blog roll.

Kanani, no matter how much he blushed, hubs is a hero. Ask the families of the one’s he sends home alive.

Mr R., that’s good. I hope your are rewarded soon.

Hope, Tisk, tisk (shaking head) there is one in every crowd.

I get into a lot of projects. Some stick, some don't. This is one that I've wanted to do for a long time and I'm so happy to be involved. I already think of my MP as a family member, and even if I never hear from him all I hope is that I brighten his days and make him feel closer to home.

I actually got word of Hope's project through your blog. I signed up to adopt an MP and just heard back from him last Sunday.