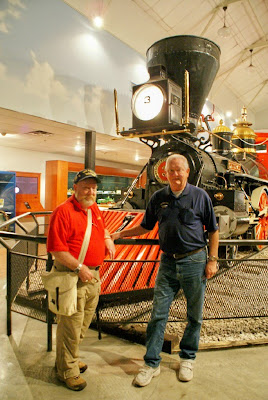 I told you guys that I sent a couple of days with an old shipmate in Chattanooga last week. Chuck is one of the fingers on my one hand (friends) and I would be glad and feel safe to have him on my six anytime, anhywhere.

Chuck is a deacon in the Catholic Church and as such can give sermons, which he does often, and most everything a priest can do except give absolution and hear confessions and molest little boys.

He is retired from some company where he did photo shoots for catalogs and volunteered his time as a prison minister. He didn’t actually preach in the jails and prisons, he just mostly listen to the men talk. He is well known and loved in the Illinois penal system and in his church community. And he is my friend.

While we were together, I took them down to Kennesaw, GA, to the museum that houses The General, the train William Andrews and his men stole at Big Shanty (now Kennesaw) and started the Great Locomotive Chase. Maryann, his wife, took this picture and Chuck titled it, “The Three Generals.” Cool, huh?

Y'all note: The Haversack Chuck is wearing as a camera case is an actual Civil War Haversack.
Posted by Coffeypot at 4:30 PM

Why does this photograph look so familiar? Deja vu all over again...

Been there; done that have ya Jim? I only take my friends to hallowed ground.

Good company and a nice place to visit. That is good!

Damn! Everything in that picture is old!