Rednecks - Y'all Gotta Love Us

(Thanks Paxford)
As I mentioned on Friday, I am starting a new series called Redneck Monday. We are a bunch of good folks who love to laugh - especially at ourselves. So enjoy this first installment. Also, if you see any you like, take’em with ya and pass’em on. 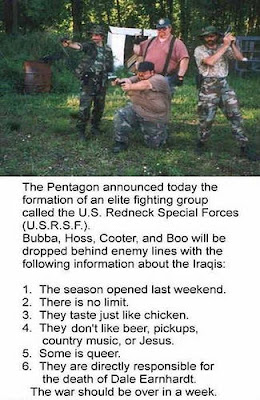 Here are a few tidbits I picked up by state:

Alabama
A group of Alabama friends went deer hunting and paired off in twos for the day. That night, one of the hunters returned alone, staggering under the weight of an eight-point buck. "Where's Henry?" the others asked.
"Henry had a stroke of some kind. He's a couple of miles back up the trail," the successful hunter replied.
"You left Henry laying out there and carried the deer back?" they inquired.
"A tough call," nodded the hunter. "But I figured no one is going to steal Henry!"

Georgia
The owner of a golf course in Georgia was confused about paying an invoice, so he decided to ask his secretary for some mathematical help. He called her into his office and said, "You graduated from the University of Georgia and I need some help.. If I were to give you $20,000, minus 14%, how much would you take off?"
The secretary thought a moment, and then replied, "Everything but my earrings."

Louisiana
A senior at Louisiana was overheard saying ... "When the end of the world comes, I hope to be in Louisiana . "When asked why, he replied, "I'd rather be in Louisiana because everything happens in Louisiana 20 years later than in the rest of the civilized world."

Mississippi
The young man from Mississippi came running into the store and said to his buddy, "Bubba, somebody just stole your pickup truck from the parking lot!" Bubba replied, "Did you see who it was?"
The young man answered, "I couldn't tell, but I got the license number."

South Carolina
A man in South Carolina had a flat tire, pulled off on the side of the road, and proceeded to put a bouquet of flowers in front of the car and one behind it. Then he got back in the car to wait. A passerby studied the scene as he drove by and was so curious he turned around and went back. He asked the fellow what the problem was.
The man replied, "I have a flat tire."
The passerby asked, "But what's with the flowers?"
The man responded, "When you break down they tell you to put flares in the front and flares in the back. I never did understand it neither."

Tennessee
A Tennessee State trooper pulled over a pickup on I-65. The trooper asked, "Got any ID?" The driver replied, "Bout whut?"

Texas
The Sheriff pulled up next to the guy unloading garbage out of his pick-up into the ditch.
The Sheriff asked, "Why are you dumping garbage in the ditch? Don't you see that sign right over your head."
"Yep", he replied. "That's why I dumpin it here, cause it says: 'Fine For Dumping Garbage'."


You can say what you want about the South, But you never hear of anyone retiring and moving North.
.
.
Posted by Coffeypot at 12:08 AM

Yep! You know them good ole boys will do what the sign says everytime.

wait! shouldn't that be "Y'all gotta love us" ;D

Those are all funny! I'm forwarding this to my non-bloggy friends who live in WV.

Some of thems gots bigger tits than I do!

Really funny, and I did notice people usually don't retire to the north.