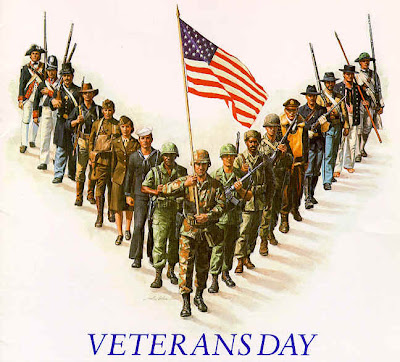 Today is Veteran's Day. I posted this back in 2006 and I wanted to bring it back this year; not because I am a great writer. Read the damn thing and you will know that I am anything but. However I am bringing it back simply because it was from my beginning and not that many read it. But with all the hoorahs and thank you’s, there is something I don’t see mentioned to often concerning our vets. It’s the change a veteran goes though.

These are men and women who left their homes, family and friends to serve their country. Some were drafted, some, like today’s military, volunteered, and some were sent as a condition of not going to jail.

Each had his/her own reasons for joining and some paid with their life. But the bottom line is, they served. They may not have liked it - probably hated it - but they stayed to the end. Some stayed many years and retired. But they were all changed; some profoundly.

No matter what they did or became after their service, for a while they were heroes. I read the book and saw the TV series on A Band of Brothers, the stories of a company of 101st Air Bone Rangers who dropped behind the lines in France the day before D-Day. One of the men was the sergeant – and I apologize that I don’t remember his name – who received repeated praise for his heroism and sound judgment and leadership. After the war the demons got to him and he died alone in San Francisco a drunk and made a living as a cab driver. Now there is absolutely nothing wrong with being a cab driver. The point is, there was a time when he was strong, proud, and brave. Simply a hero.

That’s just one of millions of stories about our vets. After serving they went different ways and pursued different paths in life. They have their memories and their own stories. If you want to be fascinated and blessed, just take the time to ask them what they did in the service. Some won’t, or can’t, answer. That’s okay, too. Just be aware that they have their demons because they were serving our country. Thank them anyway.

I love that illustration.
A good veteran's day to you, John.
Have a great one, take some pics if you go to a ceremony.

Thanks ladies and gentlemen of the Armed Forces for your service.

You could post this every Veterans Day and it would still ring true.
I second The Peach Tart with many thanks to all who serve and have served.


P.S. I right clicked the pic for my collection!;)

Great posting,Thank you for it.

Thank you for your service to our country John

Yeah yeah...you don't htink you did anything and I should say thank you to other vets not you.

Heh.
When do I ever listen to you?
*grin*

Veterans of every era deserve our support and respect. I've talked with a few who not only served, but saw the horrors that war brings. Some of them openly spoke of their experiences, others would not. It affects each one differently.

I too love that illustration.

The people who serve and have served are an inspiration of bravery and selflessness.

Thanks for putting that out there. Bless our troops.

Thank you John for the time you spent serving this great country.

Thank you...from the bottom of my heart. You are all heroes in my book. God bless.

Just wanted to add my "THANKS" to the others. And the same to all your brothers and sisters in arms...