Bumper Stickers Seen On A Military Base 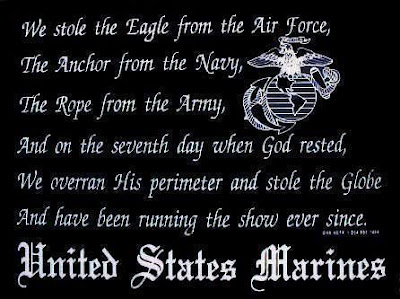 "Except For Ending Slavery, Fascism, Nazism and Communism, WAR has Never Solved Anything."

"Water-boarding is out so kill them all!"

"When In Doubt, Empty The Magazine"

"The Marine Corps - When It Absolutely, Positively Has To Be Destroyed Overnight"

"Death Smiles At Everyone - Marines Smile Back"

"Marine Sniper - You can run, but you'll just die tired!"

"What Do I Feel When I Kill A Terrorist? A Little Recoil"

"Life, Liberty and the Pursuit of Anyone Who Threatens It"

"Happiness Is A Belt-Fed Weapon"

"Do Draft-Dodgers Have Reunions? If So, What Do They Talk About?"

"A Dead Enemy Is A Peaceful Enemy - Blessed Be The Peacemakers"

"Some people spend an entire lifetime wondering if they made a difference in the world. But the Marines don't have that problem." ...Ronald Reagan
Posted by Coffeypot at 10:59 PM

Wish I had one of each.

Actually chuckled out loud a couple of times :)

The soldiers cars are easily recognized. There bumpers talk to us.

One of Wards favorite presidents is Reagan. Well said.

The USMC bumper sticker on my truck says, "When you have them by the balls, their hearts and minds will follow."

No surprise a bad ass group of folks would have some bad ass bumper stickers. :-)

"A Dead Enemy Is A Peaceful Enemy - Blessed Be The Peacemakers"

I can't decide which of these two is my favorite. Great list.

I work with several guys who were in the Marine Corps. They are sharp, fit, and hard core. I love these stickers.