I Got A Medal

It’s not Christmas yet but I got a real cool gift today from my blogging buddy, Kanani Fong. It seems that she feels I went out of my way to helped her husband, David, get from one Army base to another.

Several people commented on the post I put up about the trip. But folks, I did nothing out of the ordinary. Well, in this day and time helping someone out may seem strange and above board. But that is not how I was raised. You just help out when you can and expect nothing in return. It’s a part of the Southern Hospitality you hear about.

Anyway, Kanani was appreciative enough to send me this gold coin.(I have to apologize about the quality of the pictures. My camera will not take National Geographic type photos, so dig out your magnifying glasses to view them clearly.) 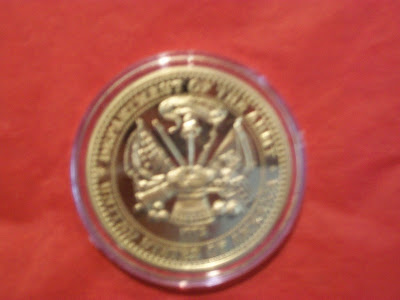 On one side, in the middle is an Army emblem and the outside edge says across the top reads, “DEPARTMENT OF THE ARMY” and across the bottom, “UNITED STATES OF AMERICA.” 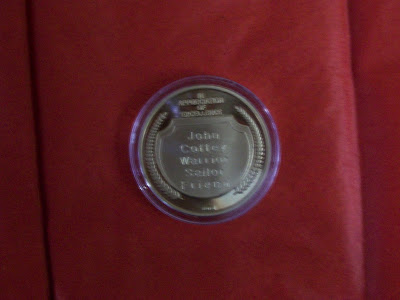 On the other side on the top, “IN APPRECATION OF EXCELLANCE” and in the middle,
“John Coffey”
“Warrior”
“Sailor”
“Friend”

This is a great gift for doing something as simple as helping a veteran in his efforts. I don’t deserve if, but I WILL cherish it.

Thank You, Kanani.
Posted by Coffeypot at 8:10 PM

I salute you John Coffey. A hero behind the scenes.

OK, Here's the deal once you've been "coined".
If any other military person who knows you sees you in a bar or place that sells drinks- you may challange each other to show your coin.
If one of you doesn't have their coin--- they have to buy the other a drink. If both have their coin, the person who has one from the lowest ranking person- has to by drinks.

I carry a pocked full of military coins...then I came up with my own that now new LT's ask me how they can earn one.
I tell the LT's "If you have to ask how to earn an award, you don't get it."

I was given a coin in Fallujha from a NAVE SEEBEA Master Chief----that was the best.

Matty, stop it. Salute David, not me.

Dude - I'll match a coin with you anytime.

Because you go out of your way to help others and then say..."awwwww it ain't nothin'...I didn't do anything special"...just makes you all the MORE special. Believe it, John Coffey. Its a privilege to be one of your blog buddies. Merry Christmas.

I have a similar one for Navy Corpsmen.

Obviously you deserved this nice gift!

See how awesome you are! I left you a little something on my blog today. You should go check it out!

That is awesome, Dad!

That's pretty special. And you do deserve it!
Happy Holidays!

Nice medal, you actually deserve more than a medal, but I see this a family blog, so I won't go into sordid detail.

A very Merry Christmas to you and yours, John, and a fantastic 2010.

Awww...I got one two...but my dad saw it and whisked it off with K's letter and is putting it into some sort of frame. I saw it for all of a day! He was so excited. Sooner or later I'll get to post about it...he promises it will be back soon.

Doh! I forgot to say congratulations! You really have done such a good job with troop support, CP!

And what a beautiful coin.

I'm so glad you got it! Sorry you're sick!
John, you've worked tirelessly for the troops. One thing we in the military realize is that saying thank you to our supporters can't be said enough.
Were it not for all of you, our lives would be very lonely.
So yes, John Coffey: Warrior, Sailor, Friend ...you've earned it all.

It's good to be appreciated. (Or so I hear. Kidding.)