My Visit With A True Hero

I should have posted this on Friday night, but I was just too tired. Then I had to post about my Secrete Santa. Plus I had to do the Santa thing at Pet Smart, so I am just getting around to it.

My blogging buddy, Kanani over at The Kitchen Dispatch is the wife of an Army surgeon who has been stationed in some forward area in Afghanistan as part of a surgical trauma unit. He and his team for professionals deserve the title, and truly are, Heroes.

His name is David and he is home - kinda. After a five day trip, he finally arrived at Fort Benning in Columbus, GA, on the Alabama border, to process back into the States and turn in some equipment. Benning is the CONUS departure and receivng area for most of the East Cost. I drove down to meet him and help him in any way possible. Luckly for me there wasn’t much for me to do because he is a squared away man.

I knew I would have to drive around and find the building to get a temporary permit to drive on the base, which is HUGE, so I called my old Navy buddy Earl, who, at 75, still works full time for a company who services all the eating places on the base. With Earl driving his truck with the proper widow decals, we were able to drive directly to David’s location. From there, we went back to my truck and had a cup of coffee and some good ‘jaw-jacking’ with Earl and saw some awesome pictures from David’s time in Ass-crack-astan.

We then headed on a cross-state run to deliver him to his home base at Fort Stewart, just outside of Savannah, GA, on the South Carolina border. It was a four and a half hour drive, in the rain, in the traffic. But he made the time fly by with his interesting conversations.

The man truly loves his work and bragged to no end about his team of doctors, and medics. It doubled my belief in the quality of men and women we have serving our country. For example, you remember all the posting and interest in FOB Keating? David and his team worked on the more seriously wounded from that debacle. He talked about it in a soft voice. He cares. 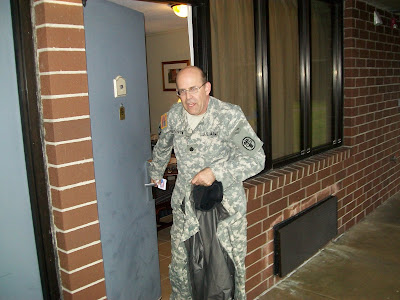 Anyway, we finally got him settled into his apartment on base. 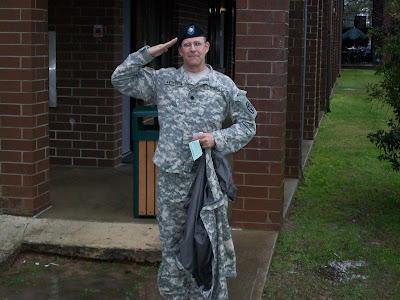 And he was so thankful; he showed me how much in the good old Army way. 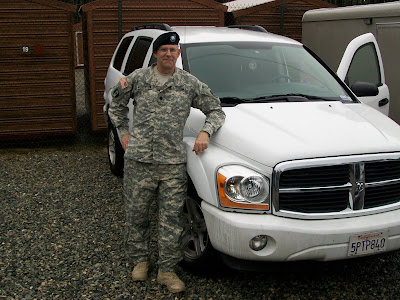 We then retrieved his car from the storage area and I left him to contact Kanani and get some much needed sleep.

But that is also why I said he was home - kinda. He will be flying out to Califorina to be with his family for Christmas. Then he will be home.

But it was such a treat to have met such a caring and giving man as LCOL David Anderson - a true American Hero.
Posted by Coffeypot at 7:23 PM

As I said over at Kanani's place, You DA MAN!!

I'm green with envy though...

How wonderful that you got to meet "The Hubs" and hear some of his adventures and the love that goes into taking care of 'Our Guys'!

Such an honor to have been bestowed, that salute. You and Earl done good. Yup, you did.

He is one of the many unsung heroes of our country.

KYW, I was just a driver. He deserves all the accolades.

Matty, that is so true.

You're a hell of a guy, John. What a great thing to do.

And what a great post, your pride in the US military and all its members is well placed and shines through beautifully.

Merry Christmas to you and yours, and to Kanani, Dr David, and all of theirs as well.

Good for you. Nice to see people doing nice thing with and for our heroes.

Rose, darling, thank you and you and yours have a Merry Christmas, too.

FG, thank you for stopping by. I'm honored.

That was nice of you to go help him. Everytime I think I've run out of stories, something like this jars a memory. Not a good one this time, but a story I will have to tell someday.
Remind me to tell the "Dust Off" story later.
Peace through superior fire power!

Awesome. What a hero.

CI Dude, nothing special. The opportunity presented itself and I jumped on it. My peasure!

Hi John!
Thank you for doing this! Sorry I didn't get here sooner, but I've had bronchitis.
After 11 various aircraft through many countries, he arrived home today. Kat and I went over to LAX, and waited for him at the USO. He came up the ramp, and we shouted. Through the doors, there he was. Home. At least.
I wanted to tell you to watch the mail. There's a surprise on its way.
I've put the photo of when we got him home on my blog.
But THANK YOU! You do a tremendous amount of work, and I know David was very happy to meet you, and put a face to all the boxes you sent!
xx
K