Redneck Monday - Again With The Sayings 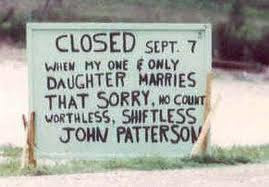 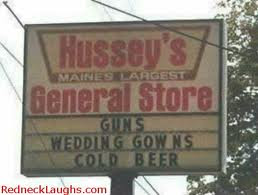 Well, it’s that time of the week again, peeps. More sayings to help you along life’s path. Enjoy and learn. Ya never know when I throw in a pop quiz.

Hard liquor and a hammer oughta fix that

A cat always blinks when you hit it on the head with a sledgehammer.

The more you cry, the less you have to piss.

If it were up to me, I'd take Heaven for the climate and Hell for the company.

Sure, drinking kills brain cells - but only the weak ones.

If stupid could fly, you'd be a jet.

Slightly burned out, but still smokin'.

Five gallons of shit in a 2 gallon bucket.

Just 'cause the cat had'er kittens in the oven, don't make'em biscuits! (referring to
Yankees coming down south).

She's so skinny, she look's like a gut with the shit slug out of it.

Her mouth is going like a bell clappin out of a goose's ass.

I'll be dipped in bacon fat, before I do that.

Coffee in a can, sugar in a cup, poke her in the butt you wont knock her up.

That is harder to find than a white bean in a black cat's ass.

I was stuck hub deep to a ferris wheel.

Stuck so bad I had to get a four wheel drive helicopter to pull my truck out!

Messed up like a kite in a hail storm!

Happier than a woodpecker in a lumber yard!

She was all over that like a bad rash on a big ass.

Busier than a blind dog in a meat house.

Dumber then a coal bucket.

I could eat the ass end out of a rag doll.

It's hotter than two dogs fucking in an attic on a hot august day.

I haven't had this much fun since the pigs ate my brother.

I don't know what I drank last night, but my mouth tastes like the bottom of a birdcage.

It's colder than a ...bankers' heart.

Riding in a car with a crazy driver..."I was chewin' buttonholes."

How are you driving? "I'm keepin' her between the ditches.

Harder than a wedding dick.

Busier than a one-armed paper hanger with jock itch.

Stuck tighter than snot on a hot oven door.

LOL. Love those rednecks! Perhaps I have said a few and heard a few. Some were new! See...I'm a redneck poet myself. :)

Slicker than snot on a doorknob.
Off like a prom dress.
Busier that a one legged man in an ass kickin' contest.
Colder than a witch's tit.

Omgosh...that is some funny shit. Where DO you get this stuff?

What a way to wake up.

My kind of humor!

Poor rag doll...I never did know which ass end was up