Getting Old In Florida 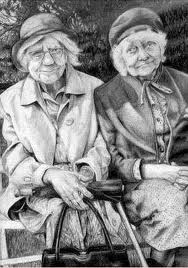 Three old ladies were sitting side by side in their retirement home in Ft. Lauderdale reminiscing. The first lady recalled shopping at the green grocers and demonstrated with her hands, the length and thickness of a cucumber she could buy for a penny.

The second old lady nodded, adding that onions used to be much bigger and cheaper also, and demonstrated the size of two big onions she could buy for a penny a piece..

A little old lady was sitting on a park bench in The Villages, a Florida Adult community. A man walked over and sits down on the other end of the bench. After a few moments, the woman asks, 'Are you a stranger here?'

He replies, 'I lived here years ago.'

'So, where were you all these years?'

'Why did they put you in prison?'

He looked at her, and very quietly said, 'I killed my wife.'

Two elderly people living in Ft. Myers , he was a widower and she a widow, had known each other for a number of years. One evening there was a community supper in the big arena in the Clubhouse.

The two were at the same table, across from one another. As the meal went on, he took a few admiring glances at her and finally gathered the courage to ask her, 'Will you marry me?'

After about six seconds of 'careful consideration,' she answered 'Yes. Yes, I will!'

The meal ended and, with a few more pleasant exchanges, they went to their respective places. Next morning, he was troubled. 'Did she say 'yes' or did she say 'no'?'

He couldn't remember. Try as he might, he just could not recall. Not even a faint memory. With trepidation, he went to the telephone and called her..

First, he explained that he didn't remember as well as he used to. Then he reviewed the lovely evening past.. As he gained a little more courage, he inquired, 'When I asked if you would marry me, did you say ' Yes' or did you say 'No'?'

A man was telling his neighbor in Miami , 'I just bought a new hearing aid. It cost me four thousand dollars, but it's state of the art. It's perfect.'

'Really,' answered the neighbor. 'What kind is it?'

A little old man shuffled slowly into the 'Orange Dipper', an ice cream parlor in Naples , and pulled himself slowly, painfully, up onto a stool.

After catching his breath he ordered a banana split.

Aging into complete oblivion is something I hope to avoid, so most of these scenarios sound mighty fine.