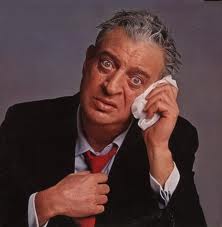 Rodney Dangerfield was the king of self-deprecating one liners. I hope these give you a smile like they did me.


My wife only has sex with me for a purpose. Last night she used me to time an egg.

It’s tough to stay married. My wife kisses the dog on the lips, yet she won’t drink from my glass!

Last night my wife met me at the front door. She was wearing a sexy negligee. The only trouble was, she was coming home.

A girl phoned me and said, 'Come on over. There's nobody home.' I went over. Nobody was home!

A hooker once told me she had a headache.

I went to a massage parlor. It was self-service.

If it weren't for pickpockets, I'd have no sex life at all.

I was making love to this girl and she started crying I said, 'Are you going to hate yourself in the morning?' She said, 'No, I hate myself now.'

I knew a girl so ugly that she was known as a two-bagger. That's when you put a bag over your head in case the bag over her head comes off.

I knew a girl so ugly... they use her in prisons to cure sex offenders.

My wife is such a bad cook, if we leave dental floss in the kitchen the roaches hang themselves.

I’m so ugly I stuck my head out the window and got arrested for mooning.

The other day I came home and a guy was jogging, naked. I asked him, 'Why?' He said, 'Because you came home early.'

My wife’s such a bad cook, the dog begs for Alka-Seltzer.

I know I'm not sexy. When I put my underwear on I can hear the Fruit-of-the-Loom guys giggling.

My wife is such a bad cook, in my house we pray after the meal.

My wife likes to talk on the phone during sex. She called me from Chicago last night.

I let the dog in the bedroom to learn how to beg.

My doctor told me to watch my drinking. Now I drink in front of a mirror.

I'll tell you one thing, I know how to satisfy my wife in bed, yeah, I leave.

My family was so poor that if I hadn't been born a boy, I wouldn't have had anything to play with.

And Rodney's last comment to the press came as he was going into the hospital for brain surgery, they ask him how long would he be in the hospital and he replied, "If everythings OK about a week, if not OK less than 2 hours."
.
.
Posted by Coffeypot at 1:05 AM

These are so good, they you laugh out loud.deven

I have always loved Rodney.

and he got no respect.

Ed, He was the king of the one-liners. Right up there with Bob Hope and me.

Sarge, except for the world. Just none from his wife...or mistress.

These did give me a laugh...sadly, I had forgotten about good ol' Rodney. He definitely is a classic.

"If it weren't for pickpockets, I'd have no sex life at all."

Eeek! That joke reminds me of Al Roker talking on the Today show this morning about choosing to be fully frisked by airport security in lieu of a full body scan. The full risking is apparently akin to a cheap date!

"A girl phoned me and said, 'Come on over. There's nobody home.' I went over. Nobody was home!" I think I have done this before...

funny... but I laughed out loud when you asked Matty if he had a stroke.
haha....you blog laugh me