Nude Blogging and TMI On I-20

Yep! That's right, kids.  Here I am in my usual motel in Winchester, VA, tired as hell, fresh out of the hot shower, some food in my tummy and trying to send you a post.  But damn it is cold in this motel room. Too cold for nude blogging. I look like a flat chested girl. Let me get the heater on…

Speaking of TMI, awhile back I had a request come pouring in wanting me to do another TMI post. Peeps, the TMI post were not my idea, but one from another blogger who wanted our post to be linked to hers. Several did, but I guess she got tired of it and stopped posting them. Anyway, I thought I would give it a try.

Back in the day before I graduated from college and became officially smart, and way before I received my MBA, making me officially smarterest, I made my living as a route salesman for the Atlanta Coca Cola Bottling Co. and a beer company selling Miller brand draft beer.  One of the perks of these types of jobs is watching the cars go past you on the highway. Anyone who has driven a truck, from a pick up to an 18 wheeler (and I have driven all of them) can vouch for this.  Back in the day, a girls legs were know a ‘seat covers.’  Short dresses, shorts, long dresses pulled up to show leg... Loved it! 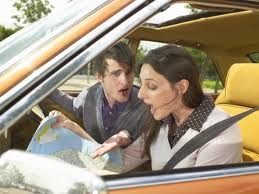 Anyway, I've most often seen is women giving their men blow jobs while he is driving on down the road.  Sometimes, he would slow down and let you watch her head going up and down like an NBA basketball.

I’ve even seen a woman giving her man and herself a hand job.  She was looking up at me and smiling.  I smile back and yelled, “Go, Go, Go…SSCCCOOORRRREEEDDD.”  Once a car came by and she was giving him head while a couple was screwing in the back seat - in a convertible.  And I have seen women with their blouses open playing with their tits almost as much as seeing the blow jobs.

Atlanta can be a fun place to work.

Anyperv, one day I was heading out I-20 in my Coke truck, with my helper, Clarence, riding with me. Clarence was a young kid who worked with me for over five years.  I call him a kid though he was only two years younger than me.  But I had just been discharged from the Navy and thought I was older than I really was.  He wasn’t totally all there, either. (example: my older brother was a vice-president of the bottling company and Clarence wanted to know how much he made.  I told him I didn’t know, but I would guess it was around $40,000 a year - a huge amount back in the 60’s - and he shook his head and said, “Uh uh! I couldn’t stand getting paid once a year.) What? Oh! Back to the TMI story.

Clarence ask me what I was doing and I told him to look over here.  He leaned across the seat and said, “SSHHHIIIITTTT!  You like watching tha mo foker?”

I told him, “No! But this is going to be one pud-pounding he will never forget - if he lives through it.”

I waited until he was giving that throbbing thrill hammer the short and fast strokes and I jerked my steering wheel hard to the left and he went spinning into the grassy medium.  I could see him in my side mirrors going round and round about three times (we were doing 70 mph at the time) before he came (no pun intended) to a stop. I guess it’s hard (again, no pun intended) to hold on to the steering wheel when your hand is wet and you are shooting all over the place.

Best Big O he ever had…I hope he broke the damn thing during the excitement. Clarence was bouncing up and down on the seat and laughing and yelling and just being Clarence. He said, “Man, you don’t fuck with Mr. Coffey”

I can imagine you've seen it all John. I once talked to someone who was an over-the-road trucker, and he pretty much described the same "scenery".

Wow ... I am totally surprised you gave up that job :)

Funny stuff. Kinda makes me wanna be a trucker.

LOL! I wonder if he damaged anything.

Well this certainly does explain a lot!! It's all in your prespective I guess!!

You might be checking out our legs but did you know that we're looking up your nostrils??