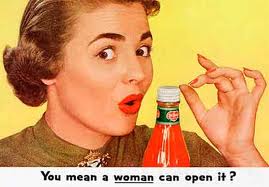 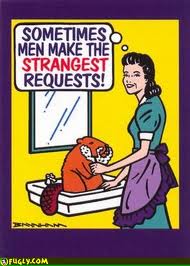 On one of my post Barb commented on my winter poem, “LOL. Exactly what I expected from you.”
Peeps, I have a God given talent in reaching even higher levels of Low Expectations. Like Peyton Manning or Tom Brady…LeBron James or Kobe Bryant…Albert Pujols or Ryan Howard…I have the talent to be the best in cheesy, cheeky, slimy post, and it all comes naturally. No extra effort or practicing on my part. It is just there.
A point in fact:
At my Senior Citizens Center they had a quiz the other day.  I lost by one point.
The question was where do women mostly have curly hair?
Apparently, the correct answer was Africa.
****
One of the other questions was to name two things commonly found in cells.
It appears that Negroes and Mexicans is not the correct answer either.
****
I've heard that Apple have scrapped their plans for the new children's iPod after realizing that iTouch Kids is not a good product name.
****
My wife told me I was no longer romantic, so I booked a table for the two of us on Valentine's Night. Problem was she sucks at snooker & eight-ball.
****
There's a new Muslim clothing shop opened in our shopping center, but I've been banned from it after asking to look at some bomber jackets.
****
You can say lots of bad things about pedophiles but at least they drive slowly past schools.
****
A biker goes to the doctor with hearing problems.
"Can you describe the symptoms to me?" asked the doctor.
"Yes. Homer is a fat yellow lazy bastard and Marge is a skinny broad with big blue hair."
****
A buddy of mine has just told me he's getting it on with his girlfriend and her twin.
I asked, "How can you tell them apart?"
He said, "Her brother's got a moustache."
****
Just put a deposit down on a brand new Porsche & mentioned it on Facebook.
I said, "I can't wait for the new 911 to arrive!"
Next thing I know 4000 fucking Muslims have added me as a friend.
****
Being a modest man, when I checked into my hotel on a recent trip, I said to the lady at the registration desk, "I hope the porn channel in my room is disabled."
To which she replied, "No, it's regular porn, you sick bastard.”
****
The FBI have discovered how to weave Muslim prayer mats out of plastic explosives ....... Apparently prophets are going through the roof !!
****
Any arguments?
Didn’t think so!
Posted by Coffeypot at 6:44 PM

Gotta say there's nothing about you that I find politically correct ;)