The Times Have Changed And So Have I - I think!

I was reading one of my new favorite peeps yesterday and she was talking bout (or comparing) her blogger peeps to the types we knew in high school. You know, the cliques, to jocks, the nerds…none of which I belonged. 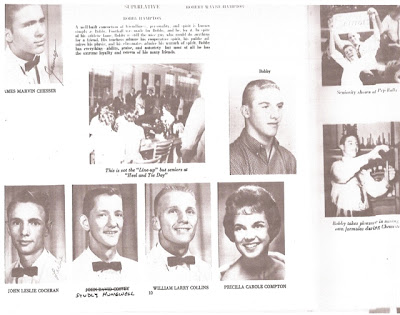 So here are a couple of pictures from my high school senior annual.  Totally slamming the crew-cut (or ‘flat-top’ as it was called back then) and sans the bags of life under my eyes. 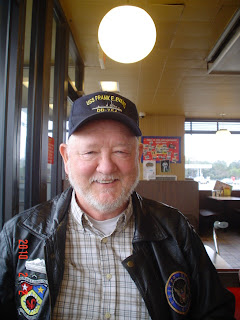 See what I mean?

And I was 6’4” and weighed 170 lbs.  I was so skinny I had to jump around in the shower to get wet…had to stick my tongue out to make a shadow…could swallow a grain of rice and look like I had a beer-belly…get the picture. 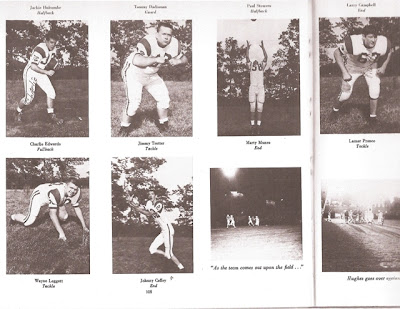 To prove it, here is my football picture from the annual.  Back in ‘62 we had to wear knee pads that were wider than my knees.  And the open mouth…a closely guarded secret I discovered.  Opening the mouth like that causes the intake of wind to draw the football into your hands.  But you had better catch it or you will have a mouth full of football and a few less teeth.

Anyskinny, I was thinking how it was for me back in the day.  It sucked.  I was a dork, a goofball (I bet that comes as a surprise to most of you) and never had any close friends.  I had a few in elementary school, but in high school everybody made new friends and drifted in different directions.  So because of the loneliness and the feeling of not being good enough, I didn’t like school or the people associated with it.

I was never a punk or trouble maker (other than talking in class and making people laugh), but I just couldn’t fit in.  I had horrible grades and was told so many times how smart I was but was just lazy.  Any of you moms out there ever say that or hear it about your precious?  Boy my mom sure laid it on.  Now I know that I had ADHD, but it wasn’t heard of back then.

So after high school I went my own way and never heard from any of the fuckers again and they never tried to get in touch with me.  When I would come home on leave from the Navy, I would drop by the school to see some of the teachers and classmates who were still there.  It was just the same.  Ignored and left out.  No one overly glad to see me.

Therefore I went the next 45 years not knowing about any of them.  What they were doing (except of a couple who were killed in Nam), how successful any of them became.  Which ones went to prison (not an uncommon thing in my school.)  Who passed away.  Nothing.

Until Face Book.  Now I am in touch with most of my graduating class plus several who graduated before and after me.

And boy how they change in the 49 years since leaving school.  They are friendly.  The jocks and the nerds have breakfast once a month (I haven’t made one of those yet but I plan on do so).  The girls who wanted to scratch the eyeballs out of each other are sharing cokes and showing pictures of their grandkids.

In Atlanta there is a hotdog/hamburger place that is pretty well known.  The Varsity is across I75-85 from Georgia Tech and back in the day was the meeting place for all the high schools around Atlanta.  On Friday and Saturday nights there was a never ending string of some of the best looking and sounding cars driving through the place.  Carhops had to dodge between the stream to deliver the orders.

Now some of the old classmates meet there every couple of months and just have a good time.  Once I kind of moved off to the side and watched them, remembering how they were and the activities of school - what was so important and drastic, shit like that.  It was kind of sad that we aren’t that young anymore, yet I am proud of who and what they have all become.  I’m still an outsider in a way, but I must say I am really enjoying their company now.

Boycunt, get the fuck off my blog. Your idiocy is not welcome here.

"what intelligent man would want to get involved with American women?"


Asshat! Don't like American women? LEAVE AMERICA! The third world is crawling with skinny gals who are definitely hungry enough to hook up with a loser like you. Personally, I'd rather go hungry.

..er, where were we? Oh, yes. High school classmates. I was an outsider too, with just a couple of close friends. I can't say I have anything against "them," but it was REALLY cool to move out-of-state 10 years later, and be who I really am. I never knew how much my childhood "public identity" stuck to me as an adult in my home town. I tried not to let it limit me too much, but it was there. Thanks to FB, I've reconnected with a few of them, and now communicate regularly with my best-friend-since-7th-grade. We were down to Christmas cards and rare letters. In fact, she's the reason I transport for NBRAN. 30 years is coming up soon; I wonder if we'll have a reunion...

I see you got the phantom visitor, too. Big chicken ****! I went to comment on his blog and he doesn't have comments. I don't know any American women who will lose sleep tonight over his decision to boycott us. I'd say his loss is definitely our gain.

Anyhooo....next year will be 30 years since I graduated and I don't think you could find a more divided class than mine was in school. I've kept up with a few friends, but otherwise nothing in 30 years. Then Facebook happened and I've found the same thing you have...we're all friends now, with only a few exceptions. It's really pretty cool.

I had to delete his comment from my blog.

Oh, and it's amazing what a little maturity will do to a person.

I had to delete the poor guys comment. I just got tied of looking at it. I think he is gay.

I felt like an outsider, too and I guess I never got over it because I don't play their little reindeer games on FB. I probably should be more mature and lovey-dovey with them but oh well.

PS You were super-skinny in that football picture! I'd say you've aged well.

this is why I use comment moderation instead of word verication,jerks and guttslime like that do not see the light of day on my blogs.

Awwww! I'm so touched and honoured that you consider me a "peep!"
And I love the pic of you now! I love seeing what my fellow bloggers look like, it's like putting a face to a name.
And I especially love the use of the word 'fucker' so you know you're one of my favourites!

Oh, and I see from your comments that that loser came and left his stupid rhetoric on your blog too. Boycunt is good. I'll be sure to use that one too should he ever resurface!

Should we turn him in to the FBI? He sounds like a serial killer, a pedophile or a slaver trolling for customers.

Well, thats weird that you're talking about this today.
I was sitting in a coffee shop last night waiting for my kid when a really tall skinny guy about my age came over and asked if I was , well, who I am. But he used my maiden name. I said yes, but didn't have a CLUE who he was. apparently we went to high school together. But I packed my shit and ran away when I was 15, thats 32 years ago! What kind of a person recognizes you 3000 miles from your home town and after 32 years??!!
Long enough comment yet?

Hah, yeah, I was and still am ADHD too, but I had a gas with the brief time I spent in school. My son is AD, he's awesome and funny. We ADHDS should rule the world.

Jeez, my wv is "psyco" must have been meant for that wacked spammer thats all over the place hating on us lovely North American women.